21:2 saying to them, “Go to the village ahead [Bethany: hometown of Mary, Martha, Lazarus] of you, and at once you will find a donkey [not a warrior’s stallion, but an animal used by common people] tied there, with her colt by her. Untie them and bring them to me [perhaps Jesus prearranged use of the animals with their owner].

21:3 If anyone says anything to you [cf. Mk. 11:5], tell him that the Lord [suggests that the owner was a disciple of Jesus] needs them, and he will send them right away.”

21:4 This took place to fulfill what was spoken through the prophet:

21:5 “Say to the Daughter of Zion, ‘See, your king comes to you, gentle and riding on a donkey, on a colt, the foal of a donkey.’ [Jesus entry into Jerusalem on a donkey (colt) fulfilled prophecy (Zech. 9:9)]“

21:6 The disciples went and did as Jesus had instructed them.

21:7 They brought the donkey and the colt [this colt had never been ridden (Mk. 11:2; Lk. 10:30)], placed their cloaks on them [presumably as saddles], and Jesus sat on them [cloaks; riding on a donkey indicated a mission of goodwill].

21:8 A very large crowd [some estimate as many as 2 million people were present in Jerusalem at Passover (cf. Jn. 12:12)] spread their cloaks on the road, while others cut branches from the trees [“palm branches” as per Jn. 12:13 (celebrated today as Palm Sunday)] and spread them on the road [“red carpet” treatment; sign of honor and submission]. 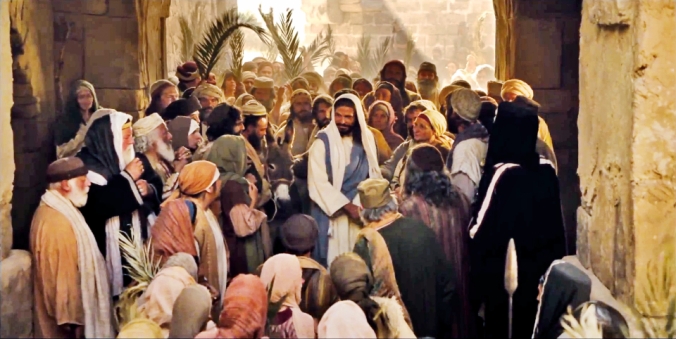 21:9 The crowds [saw Jesus as the possible political or military Messiah] that went ahead of him and those that followed shouted [repeatedly], “[cf. Ps. 118:25-26] Hosanna [means “grant salvation” or “save now” / here used as a cry of greeting, a shout of joyous praise, an homage “glory, or hail, or welcome to David’s son”] to the Son of David [refers to the Messiah]!” “Blessed is he who comes in the name of [as a representative] the Lord [“he who comes in the name of the Lord” was a messianic title]!” “Hosanna in the highest [means “May God (in heaven) save now”]!”

21:10 When Jesus entered Jerusalem, the whole city was stirred [from Greek word seio, from which we get our word seismic] and asked, “Who is this?”

21:11 The crowds answered, “This is Jesus, the prophet [possibly the eschatological prophet foretold by Moses (Deut. 18:15)] from Nazareth in Galilee.”

21:12 Jesus entered the temple area [Court of the Gentiles] and drove out [with force] all who were buying and selling [originally started as a service and convenience for visitors to Jerusalem to provide unblemished sacrificial animals and exchange foreign currency for coins to pay the Temple tax (cf. Matt. 17:24)] there [temple looked more like a marketplace than a holy place]. He overturned the tables of the money changers and the benches of those selling doves [Jesus began ministry with similar act (Jn. 2:13-25)].

21:13 “It is written,” he said to them, “‘My house will be called a house of prayer [cf. Isa. 56:7; legitimate use of temple space: prayer, meditation, fellowship, spiritual devotion to God],’ but you are making it a ‘den of robbers [people were exploited by sellers who charged exorbitant prices; cf. Jer. 7:11].’”

21:15 But when the chief priests and the teachers of the law saw the wonderful things he did and the children shouting [innocent children revealed God’s truth] in the temple area, “Hosanna to the Son of David,” they were indignant.

21:16 “Do you hear what these children are saying?” they [religious leaders rejected or ignored what God was doing] asked him. “Yes,” replied Jesus, “have you never read [Ps. 8:2], “‘From the lips of children and infants you have ordained praise’?”

21:17 And he left them [departed] and went out of [outside] the city to Bethany, where he spent the night [to find lodging].