About David
From his youth in Jesse’s household through adulthood, David was known for his relationship with the Lord. The story of David’s life and his many psalms affirm that he was indeed a man after God’s own heart.

David cultivated intimacy with God while tending sheep in the silence and solitude of desert places. Silence and solitude tutored David in the essentials of a meaningful relationship with God. Silence gave the young shepherd boy the opportunity to listen to God. Solitude gave him the opportunity to speak with God. These essential disciplines helped David maintain a lifelong relationship with God.

David went from the sheep folds to the Valley of Elah where Saul’s army occupied a hill opposite the Philistine army. The Valley of Elah became the setting for one of the highest points in David’s life. David demonstrated the importance of standing courageously for God when others oppose God’s way. Armed with his faith in God, David defeated the mighty Philistine giant Goliath. Faith in God became a distinctive characteristic of David’s lifelong relationship with God.

Later, the roof of David’s palace became the setting for one of the lowest points in his life. The decision David made on the roof led him to commit the sins of adultery and murder. Through that experience David discovered that God holds people accountable for their sins and forgives those who genuinely confess their sins. He discovered that confession of sin is essential to maintaining a lifelong relationship with God.

When David learned that God would not allow him to build the temple, rather than insisting on his own will, David humbly followed God’s will. He sacrificially invested in the project he would not personally see through to completion. David demonstrated that following God’s will is essential to maintaining a lifelong relationship with Him.

“The inspired utterance of David son of Jesse,
the utterance of the man exalted by the Most High,
the man anointed by the God of Jacob,
the hero of Israel’s songs:

David’s last words (v. 1) may have been his last official pronouncement but not necessarily the words he uttered before dying (compare 1 Kings 2:1-10). David’s oracle affirms that he was chosen by the Lord to lead Israel, was loved as a singer (v. 1), and that God spoke through him (v. 2).

One day we will speak our last words. Perhaps we will have the opportunity to share our last words with those closest to us. Regardless of whether we have that opportunity or not, we should live in such a way that the words others speak about us affirm that we had a meaningful relationship with God. One answer to the question, How can I make my life count for God? is that I must live each day in intimate fellowship with Him.

23:2 “The Spirit of the Lord spoke through me;
his word was on my tongue.

23:3 The God of Israel spoke,
the Rock of Israel said to me:
‘When one rules over people in righteousness,
when he rules in the fear of God,

23:4 he is like the light of morning at sunrise
on a cloudless morning,
like the brightness after rain
that brings grass from the earth.’

The Lord had instructed David that Israel’s ruler must be characterized by righteousness and by a reverence for God (v. 3). Such a leader would bless others by his shining example and have a strong, positive influence on others (v. 4). David had a positive influence on others while he lived and after his death. His life became the standard against which the lives of subsequent kings were measured (for example, see 1 Kings 15:3). His example continues to influence and bless people today as they study the record of his life and read his many psalms.

We too must live each day with the understanding that our example and influence can either bless or harm others. Whether we realize it or not, some people look to us and to the example we set for the nourishment to make it through another day. Think about it. There are people whose lives are nourished by ours. People who eat the bread of our influence, long for the fruit of our praise, and drink from the fountain of our example. There are people who watch us and notice what we do and how we do it and why we do it. There are people who look to us for the encouragement to go on, for the reassurance that life’s obstacles can be overcome, and for a greater understanding of how to live life in a way that is pleasing to God.

On occasion we are made aware of how others have been refreshed by us through expressions like: “You are a blessing to me,” or “I have been greatly encouraged by you,” or “I appreciate you.” These are indications that other people’s lives are indeed nourished by ours, that others draw from the well of our example, and that many drink from the stream of our influence. It is therefore, incumbent upon us to carefully guard our influence.

Jesus said that salt that has become tasteless “is no longer good for anything, except to be thrown out and trampled by men” (Matt. 5:13). And so it is with our influence if it becomes polluted. We must determine to live our lives in such a way that we are a blessing to others. In addition to living each day in intimate fellowship with God, a second answer to the question, How can I make my life count for God? is that I must live a life that blesses others.

23:6 But evil men are all to be cast aside like thorns,
which are not gathered with the hand.

23:7  Whoever touches thorns
uses a tool of iron or the shaft of a spear;
they are burned up where they lie.”

David recalled that God had made an everlasting covenant with him (v. 5). God promised David that his dynasty would endure — all the way to the Messiah, the King of Kings (2 Sam. 7:12-16). David indicated he was sure God would keep His promise. After David’s death there were times when people questioned whether God would actually keep His promise to David (see Ps. 89). However, as David had indicated when he spoke his final words, God did indeed keep His promise (see Ps. 89:34-36).

Old Testament prophets like Isaiah (9:6-7), Jeremiah (23:5), and Ezekiel (37:24-25) understood the significance of God’s promise to David. They looked beyond the immediate fulfillment of God’s promise in the person of Solomon and David’s descendants on the throne of Judah. They understood that the Messiah would come from David’s line. When Jesus was born, the angel Gabriel affirmed that He was the One whom Israel had been awaiting since David’s day (see Luke 1:32-33). The salvation (v. 5) David and other Old Testament believers looked forward to was fulfilled in Jesus Christ.

Like David, we too need to realize that God keeps His promises. God has promised that those who are in a right relationship with Him will be saved and those who are evil will be punished (vv. 6-7). We can make our lives count for God by believing His promises and receiving His salvation. And, like David, we should take measures to insure that our house is right with God (v. 5).

The greatest legacy we can leave is a household of faith. In addition to living each day in intimate fellowship with God and living a life that blesses others, a third answer to the question, How can I make my life count for God? is that I must hold to God’s promises confidently.

23:8 These are the names of David’s mighty warriors:

Josheb-Basshebeth, a Tahkemonite, was chief of the Three; he raised his spear against eight hundred men, whom he killed in one encounter. 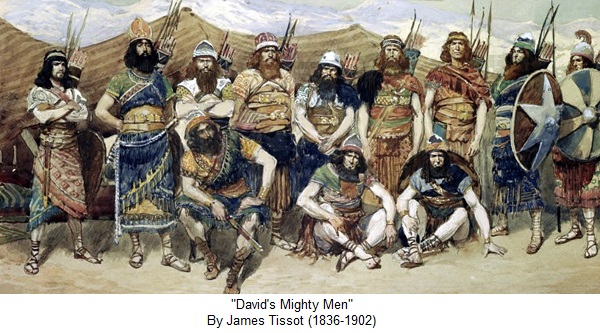 23:9 Next to him was Eleazar son of Dodai the Ahohite. As one of the three mighty warriors, he was with David when they taunted the Philistines gathered at Pas Dammim  for battle. Then the Israelites retreated,

23:10 but Eleazar stood his ground and struck down the Philistines till his hand grew tired and froze to the sword. The Lord brought about a great victory that day. The troops returned to Eleazar, but only to strip the dead.

23:11 Next to him was Shammah son of Agee the Hararite. When the Philistines banded together at a place where there was a field full of lentils, Israel’s troops fled from them.

23:12 But Shammah took his stand in the middle of the field. He defended it and struck the Philistines down, and the Lord brought about a great victory.

23:13 During harvest time, three of the thirty chief warriors came down to David at the cave of Adullam, while a band of Philistines was encamped in the Valley of Rephaim.

23:14 At that time David was in the stronghold, and the Philistine garrison was at Bethlehem.

23:15 David longed for water and said, “Oh, that someone would get me a drink of water from the well near the gate of Bethlehem!”

23:16 So the three mighty warriors broke through the Philistine lines, drew water from the well near the gate of Bethlehem and carried it back to David. But he refused to drink it; instead, he poured it out before the Lord.

Such were the exploits of the three mighty warriors.

23:18 Abishai the brother of Joab son of Zeruiah was chief of the Three. He raised his spear against three hundred men, whom he killed, and so he became as famous as the Three.

23:19 Was he not held in greater honor than the Three? He became their commander, even though he was not included among them.

23:20 Benaiah son of Jehoiada, a valiant fighter from Kabzeel, performed great exploits. He struck down Moab’s two mightiest warriors. He also went down into a pit on a snowy day and killed a lion.

23:21 And he struck down a huge Egyptian. Although the Egyptian had a spear in his hand, Benaiah went against him with a club. He snatched the spear from the Egyptian’s hand and killed him with his own spear.

23:22 Such were the exploits of Benaiah son of Jehoiada; he too was as famous as the three mighty warriors.

23:23 He was held in greater honor than any of the Thirty, but he was not included among the Three. And David put him in charge of his bodyguard.

23:24 Among the Thirty were: Asahel the brother of Joab, Elhanan son of Dodo from Bethlehem,

23:26 Helez the Paltite, Ira son of Ikkesh from Tekoa,

23:27 Abiezer from Anathoth, Sibbekai the Hushathite,

23:28 Zalmon the Ahohite, Maharai the Netophathite,

23:29 Heled son of Baanah the Netophathite, Ithai son of Ribai from Gibeah in Benjamin,

23:30 Benaiah the Pirathonite, Hiddai from the ravines of Gaash,

23:32 Eliahba the Shaalbonite, the sons of Jashen, Jonathan

23:35 Hezro the Carmelite, Paarai the Arbite,

23:37 Zelek the Ammonite, Naharai the Beerothite, the armor-bearer of Joab son of Zeruiah,

23:39 and Uriah the Hittite. There were thirty-seven in all.