12:1 Samuel said to all Israel, “I have listened to everything you said to me and have set a king over you.

12:2 Now you have a king as your leader. As for me, I am old and gray, and my sons are here with you. I have been your leader from my youth until this day.

Samuel is one of the most significant figures in the Old Testament. He was born in the days before Israel had a king. During the tumultuous period between Joshua and Saul, the tribes of Israel were led by judges or military leaders who delivered the people from nations seeking to oppress them.

Samuel served as the last judge and the first king-maker. He also served in the roles of priest and prophet. When the elders of Israel appealed to Samuel for a king “as all the other nations have” (1 Sam. 8:5), Samuel warned them about the dangers of a monarchy and reluctantly agreed to give them a king. Saul was later selected to be the first king over Israel. 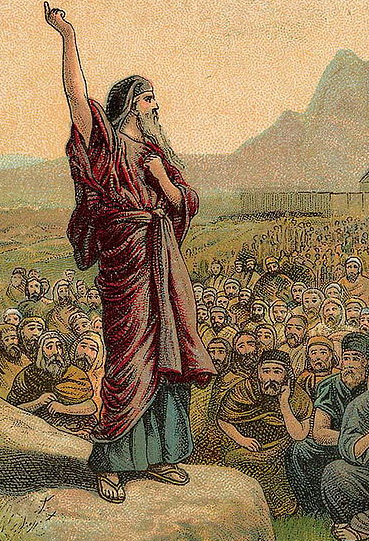 12:3 Here I stand. Testify against me in the presence of the Lord and his anointed. Whose ox have I taken? Whose donkey have I taken? Whom have I cheated? Whom have I oppressed? From whose hand have I accepted a bribe to make me shut my eyes? If I have done any of these things, I will make it right.”

12:5 Samuel said to them, “The Lord is witness against you, and also his anointed is witness this day, that you have not found anything in my hand.”

“He is witness,” they said.

12:6 Then Samuel said to the people, “It is the Lord who appointed Moses and Aaron and brought your ancestors up out of Egypt.

12:7 Now then, stand here, because I am going to confront you with evidence before the Lord as to all the righteous acts performed by the Lord for you and your ancestors.

12:8 “After Jacob entered Egypt, they cried to the Lord for help, and the Lord sent Moses and Aaron, who brought your ancestors out of Egypt and settled them in this place.

12:9 “But they forgot the Lord their God; so he sold them into the hand of Sisera, the commander of the army of Hazor, and into the hands of the Philistines and the king of Moab, who fought against them.

12:10 They cried out to the Lord and said, ‘We have sinned; we have forsaken the Lord and served the Baals and the Ashtoreths. But now deliver us from the hands of our enemies, and we will serve you.’

12:11 Then the Lord sent Jerub-Baal, Barak, Jephthah and Samuel, and he delivered you from the hands of your enemies all around you, so that you lived in safety.

12:12 “But when you saw that Nahash king of the Ammonites was moving against you, you said to me, ‘No, we want a king to rule over us’—even though the Lord your God was your king.

12:13 Now here is the king you have chosen, the one you asked for; see, the Lord has set a king over you.

On the day that Samuel presented Saul to the nation, the people acknowledged that Samuel had led them with integrity. Samuel also reminded them about the Lord’s righteous acts in behalf of them and their ancestors (12:7). However, in spite of Samuel’s capable leadership as a judge and the Lord’s faithfulness to deliver them from their enemies, the people had still insisted on having a king.

12:14 If you fear the Lord and serve and obey him and do not rebel against his commands, and if both you and the king who reigns over you follow the Lord your God—good!

12:15 But if you do not obey the Lord, and if you rebel against his commands, his hand will be against you, as it was against your ancestors.

Samuel told the people that all would be well as long as they and the king obeyed the Lord. He also warned them that failure to obey God would invite trouble. The people acknowledged their sin and pleaded with Samuel to pray for them.

12:16 “Now then, stand still and see this great thing the Lord is about to do before your eyes!

12:17 Is it not wheat harvest now? I will call on the Lord to send thunder and rain. And you will realize what an evil thing you did in the eyes of the Lord when you asked for a king.”

12:18 Then Samuel called on the Lord, and that same day the Lord sent thunder and rain. So all the people stood in awe of the Lord and of Samuel.

12:19 The people all said to Samuel, “Pray to the Lord your God for your servants so that we will not die, for we have added to all our other sins the evil of asking for a king.”

One of the wisest decisions the people of Israel made was asking Samuel to pray for them. James affirms that the prayer of a righteous person is effective (James 5:16). Jeremiah the prophet regarded Samuel and Moses as two great intercessors of Israel (Jer. 15:1).

12:20 “Do not be afraid,” Samuel replied. “You have done all this evil; yet do not turn away from the Lord, but serve the Lord with all your heart.

12:21 Do not turn away after useless idols. They can do you no good, nor can they rescue you, because they are useless.

12:22 For the sake of his great name the Lord will not reject his people, because the Lord was pleased to make you his own.

12:23 As for me, far be it from me that I should sin against the Lord by failing to pray for you. And I will teach you the way that is good and right.

Samuel prayed for the Israelites to be God’s people and remained committed to teaching them what was right. He expressed that it would be a sin to not pray for those entrusted to him. Like Samuel, we never retire from the ministry of prayer or service to others. One of the kindest things we can do for others is to pray for them.

I have made it a point over the years to ask those whom I regard as faithful intercessors to pray for me. And I take seriously the requests of others to pray for them. I was fortunate to learn about the importance of prayer and how to pray from some godly mentors.

12:24 But be sure to fear the Lord and serve him faithfully with all your heart; consider what great things he has done for you.

12:25 Yet if you persist in doing evil, both you and your king will perish.”