6:1 In those days when the number of disciples was increasing, the Grecian Jews [Jews from other lands who spoke Greek and had converted to Christianity at Pentecost] among them complained [tension] against the Hebraic Jews [native Jewish Christians who spoke Hebrew (language of religion) and Aramaic (Hebrew dialect; spoken in marketplace)] because their [Greek-speaking Jewish converts; suggests tension because other widows (Hebraic Jews) not being overlooked] widows [vulnerable members of society; cf. 1 Tim. 5:3-16 re: widows] were being overlooked [to look beyond, to neglect; possibly intentional; possibly fueled by cultural prejudices; problem may have persisted for some time] in the daily distribution of food [Gr. diakonia].

6:2 So [intentional effort to address problem rather than place blame] the Twelve [the original apostles (except Judas Iscariot) including Matthias (cf. Acts 1:13,26)] gathered all [entire church; indicates problem was serious] the disciples [the rest of the believers] together and said, “It would not be right [fit or pleasing] for us to neglect [to abandon] the ministry of the word of God [spiritual food] in order to [distribution of spiritual and physical food were important but apostles understood what they had been called to do] wait [serve tables] on tables [distribution of physical food].

Note: Leaders must set their priorities and enlist others to assist with legitimate needs. Had “the Twelve” abandoned the preaching and teaching of God’s Word to administer the care of the widows, they would have solved one problem but created another.

6:3 [the solution to the problem; note the five requirements for the candidates] Brothers, choose [select carefully; note that they did not ask for volunteers] seven [1] men [2] from among you [i.e., believers] who [3] are known to be [have good reputations; give evidence that the Spirit was working in them] [4] full of the Spirit and [5] wisdom [able to apply God’s truth to life situations]. We [“The twelve were to give their approval to the congregation’s selection of the seven.” (FF Bruce)] will turn [delegate] this responsibility over to them [cf. Eph. 4:12]

Note: According to Acts 6:5, all seven men chosen for this work had Greek names.

6:4 and will give our [the apostles kept their priorities straight] attention to [“to be intently engaged in”] prayer and the ministry of the word [proclaiming the gospel].”

6:5 This proposal pleased the whole group. They chose Stephen, a man full of faith and of the Holy Spirit; also Philip, Procorus, Nicanor, Timon, Parmenas, and Nicolas from Antioch, a convert to Judaism. 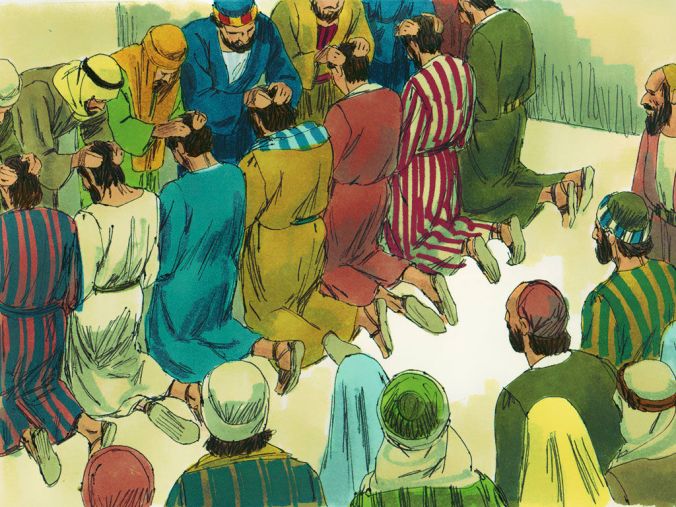 6:6 They presented these men to the apostles, who prayed and laid their hands on them.

6:7 So the word of God spread. The number of disciples in Jerusalem increased rapidly, and a large number of priests became obedient to the faith.

6:8 Now Stephen [one of seven selected to serve tables (4:5)], a man full of God’s grace and power [these are the things the church recognized in his character], did great wonders and miraculous signs [the first non-apostle to whom miracles are ascribed; his ministry was not confined to serving tables] among the people [some of whom opposed him (4:9-15)].

We are introduced to Stephen in verse 5 where he is listed first among those chosen to distribute food to widows. He is described as “a man full of faith and the Holy Spirit.” The early church chose the godliest men they could find to assist with ministry tasks. Stephen was also full of grace and power.

John had described Jesus as being “full of grace and truth” (John 1:14). Grace gives us the capacity to be kind and gentle toward others and often opens the door for others to be receptive to the truth of the gospel.

Stephen’s ministry was not confined to serving tables. He is the first New Testament character, apart from Jesus and the apostles, who is described as one who performed great wonders and signs among the people.

6:9 Opposition arose, however, from members of the Synagogue of the Freedmen [former slaves or the children of former slaves who had been freed by Rome and had formed their own synagogue in Jerusalem] (as it was called)—Jews of Cyrene [located in northern Africa] and Alexandria [located in Egypt] as well as the provinces of Cilicia [Paul’s home province; perhaps Paul heard Stephen speak] and Asia. These men [Hellenistic Jews] began to argue with Stephen,

Stephen’s message and miracles caught the attention of those who belonged to the Freedmen’s Synagogue—a group of former slaves or the children of former slaves who had been freed by Rome. These Hellenistic Jews had come to Jerusalem from various regions and had formed their own synagogue there. Some, like Saul, had come to Jerusalem from Cilicia. Saul likely was among those who came forward to argue with Stephen.

6:10 but they could not stand up against his wisdom [Stephen knew what he believed and why and could intelligently articulate his beliefs; cf. Matt. 22:37 re: loving God “with all your mind”] or the Spirit by whom he spoke.

The members of the synagogue soon learned that Stephen was not a second-rate debater. He intelligently spoke about what he believed and why he believed it. Stephen reminds us that it is not enough to “love the Lord your God with all your heart” and “with all your soul.” You must also love Him “with all your mind” (see Matt. 22:37).

We must cultivate strong minds for God that will prepare us to intelligently contend for the faith. That takes discipline and hard work, but it will pay off. Stephen boldly discussed the gospel with members of the Freedman’s Synagogue and was enabled to refute all the arguments they used.

6:11 Then they [Hellenist Jews] secretly persuaded [or induced; to put someone up to something] some men to say [the false witnesses were coached in what to say (and perhaps paid to say it)], “We have heard Stephen speak words of blasphemy against Moses and against God.”

Unable to stand up against Stephen’s godly wisdom, the members of the synagogue resorted to underhanded tactics. They induced or secretly persuaded some men to accuse Stephen of blasphemy against Moses and against God. More than likely they bribed these false witnesses and coached them in exactly what to say. The Sadducees, the group that controlled the Sanhedrin, accepted and believed only the writings of Moses (Genesis through Deuteronomy). They considered blasphemy against Moses and against God a punishable crime.

6:12 So they stirred up the people [general population] and the elders [representing the Sadducees] and the teachers of the law [representing the Pharisees]. They seized [they rushed at him and dragged him off] Stephen and brought him before the Sanhedrin.

As in the case of Jesus, Stephen’s opponents stirred up the general population and the religious leaders. Since their charges were vague and difficult to prove, they stirred up more than enough dust to obscure the truth. They used inflammatory rhetoric to recruit others to join their cause against Stephen. And, for the first time, the masses were hostile toward a follower of Jesus. They rushed at Stephen, seized him, and dragged him off to the Sanhedrin, the same Council that had tried to silence Peter and John.

The Freedmen vigilante group produced false witnesses who resorted to exaggerated claims: This man does not stop speaking. They made it sound as though Stephen incessantly spoke against the holy place and the law. The Jews believed that the temple was God’s dwelling place and the only valid place where He could be truly worshiped. So, to speak against this holy place was tantamount to speaking against God. They also considered any attack against the law as an attack against Moses, the recipient of the law.

6:14 For we have heard him say [Stephen apparently quoted John 2:19] that this Jesus of Nazareth will destroy this place [the temple was precious to the Jews] and change the customs [Jews believed the Law could never be changed] Moses handed down to us.”

The false witnesses bolstered their exaggerated claims with misinformation. Stephen had apparently quoted Jesus’ words in John 2:19, “Destroy this sanctuary, and I will raise it up in three days.” This was not a threat to destroy the temple, as the false witnesses charged, but rather a prophecy about Jesus’ own death and resurrection.

Additionally, the false witnesses said that Jesus had no regard for the customs that Moses handed down to them. The law was precious to the Jews and they believed that it could never be changed. Jesus however, did not nullify Moses’ Law, but rather completely fulfilled it. Nevertheless, Stephen’s opponents managed to accuse him of nothing less than heresy and sedition.

6:15 All who were sitting in the Sanhedrin looked intently at Stephen, and they saw that his face was like the face of an angel [cf. Moses’ face when descending from Sinai (Ex. 34:29-35) and Jesus on mount of transfiguration (Lk. 9:29)].

When Stephen’s accusers finally stopped their tirade, all eyes turned to Stephen to see how he would respond. They may have expected an angry, bitter, or even fearful response. Stephen however, modeled peace under pressure. Those who had falsely accused him saw that his face was like the face of an angel.

Ironically, the face of the man accused of opposing Moses shone like the face of Moses when he descended from Mount Sinai (Ex. 34:29-35). With the glow of Moses on his face, the words of Moses in his head, and the courage of Moses in his heart, Stephen answered his accusers. We exhibit boldness when we continue to stand by our Christian beliefs even though others are hostile to us.