What does the Bible tell us about Athaliah?
[A] She was the daughter of Ahab and Jezebel (2 Kings 8:26).

[B] She married Jehoram (Joram), the son of Jehoshaphat king of Judah.

[C] She was the mother of Ahaziah, the fifth king of Judah, who was slain by Jehu’s men.

What did Athaliah do when she learned of her son’s death?
After Ahaziah’s death, Athaliah “rose and destroyed all the royal offspring,” that is, everyone who had survived Jehu’s purge (2 Kings 11:1 and 2 Chronicles 22:10). She usurped the throne and had all of her grandchildren killed so that no one would threaten her unlawful reign. She was as wicked as her mother and brought the dynasty of David to the brink of ruin. Athaliah reigned for six years (2 Kings 11:3). 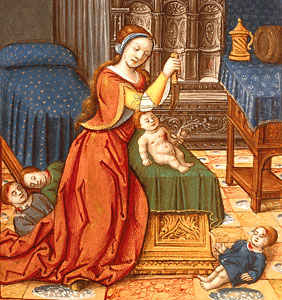 Who was Jehosheba and what role did she play when Athaliah seized the throne of Judah?
Jehosheba was the daughter of King Joram and sister of Ahaziah. Some feel that she was not the daughter of Athaliah, but of Joram by another wife. When Athaliah began her murderous purge of Ahaziah’s offspring, Jehosheba stole and hid away a son of Ahaziah named Joash. She hid the boy and his nurse in the house of the Lord during the six-year reign of Athaliah (2 Kings 11:2 and 2 Chronicles 22:12). Joash, a helpless baby, would eventually become the instrument of Athaliah’s fall (see Psalm 8:2).

Practical Consideration: One person can make a difference.
One person can make a difference in the face of great odds. Jehosheba placed herself at great risk when she rescued Joash from Athaliah’s murderous purge. Jehoiada also placed himself at great risk when he hid the infant heir to the throne within the walls of the house of God. Each of these individuals made a difference. They played a key role in insuring that David would continue to have an heir on the throne.

[A] Jehoiada brought together military, religious, and civil leaders into the house of the Lord and made a covenant with them and put them under an oath (probably of loyalty and support for the coup) and then showed them the king’s son (2 Kings 11:4 and 2 Chronicles 23:2).

[B] He organized the military and religious leaders in such a fashion as to insure the protection of Joash (2 Kings 11:5-8 and 2 Chronicles 23:4-8).

[D] Once everyone was armed and in position on the Sabbath, Jehoiada brought Joash out and crowned and anointed him king. Notice also that he “gave him the testimony,” that is, put the law of the Lord in the young king’s hands. All of the people shouted their support by saying, “Long live the king!” (2 Kings 11:12 and 2 Chronicles 23:10-11).

Practical Consideration: We must not be afraid to stand for right.
Jehoiada was indeed a courageous man. He patiently waited for the right moment to set in motion the events that would depose the wicked Athaliah and restore the throne to its rightful heir. When that moment came, he boldly stood for what is right and motivated the people to do what was necessary to put Joash on the throne.

How did Athaliah respond to the commotion surrounding the coronation?
When Athaliah heard all of the noise and commotion, she went to the house of the Lord to see what was happening (2 Kings 11:13). It was then that she discovered that her purge had not been as thorough as she had believed. Her grandson Joash was wearing the crown and had the support of the people. Athaliah then tore her clothes and cried, “Treason! Treason!” (2 Kings 11:14). Jehoiada promptly issued an order that she be executed (but not in the house of the Lord) along with anyone who might follow her (2 Kings 11:15). Athaliah was put to death with the sword “at the entrance of the Horse Gate of the king’s house” (2 Chronicles 23:12-15 and 2 Kings 11:16, 20). Her death brought rejoicing in the land! (2 Kings 11:20). No one cried at her funeral!