1 Kings 11:1-13
11:1 King Solomon, however, loved many foreign women besides Pharaoh’s daughter [cf. 1 Kings 3:1]—Moabites [Moab located east of the Dead Sea], Ammonites [Ammon located northeast of the Dead Sea], Edomites [Edom located southeast and southwest of the Dead Sea], Sidonians [from the area of the Phoenician city of Sidon] and Hittites [kingdom had existed north of Israel; had become integrated into Israel; Bathsheba’s first husband was a Hittite (2 Sam. 11:3); Hittites conscripted to serve as laborers (1 Kings 9:20-21)]. 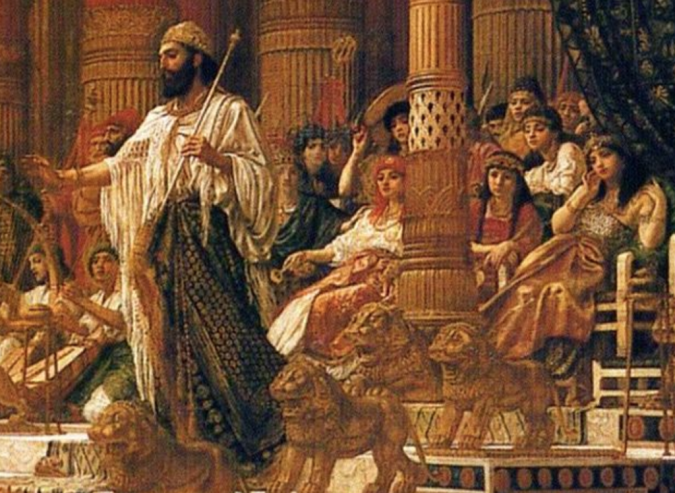 11:2 They were from nations about which the LORD had told the Israelites [cf. Ex. 34:15-16; Deut. 7:1-5 re: warnings about the dangers of intermarriage with other nations], “You must not [this prohibition based on spiritual reasons, not racial reasons] intermarry with them, because [note the reason behind the prohibition; behind every negative command stand the positive principles of protection from harm and provision of something better] they will surely turn your hearts after their gods.” Nevertheless, Solomon held fast to them in love [means “a strong emotional attachment” (implies a desire to be in the presence of the object of love); what or who we love can impact our allegiance to God].

Note: Ask these questions before entering into any association…
• What do they believe? — Are their beliefs consistent with the Word of God?
• How do they behave? — How will their behavior impact my life?
• What will I become? — Will I have to compromise my convictions in order to get along with them?

11:3 He had seven hundred wives of royal birth [indicates that marriages were primarily political (to maintain peace and mutual economic benefits); considered good politics from a worldly perspective] and three hundred concubines [sort of second-class wives], and his wives led him [Solomon placed greater value on the words of his wives than on the Word of God] astray [cf. Deut. 17:16-17; conscious disobedience can only lead to disaster (cf. Prov. 13:13); cf. Ps. 1:1].

Note: What worldly beliefs and lifestyles threaten to endanger your commitments to God and His purposes?

11:4 As Solomon grew old [through the years Solomon’s wives led him to become tolerant of the very things God had told him to reject (a reminder that deterioration is never sudden); old age does not exempt us from temptation], his wives turned his heart [indicates the inner being of a person, including mind, emotion, and will] after other gods, and his heart [Solomon’s actions followed the direction of his heart] was not fully devoted [Solomon quit worshiping the Lord exclusively] to the LORD his God, as the heart of David his father had been.

11:5 He followed [literally “walked after”; he no longer hated the things that God hated; he accepted the things that were detestable in God’s sight; violated the first commandment (Ex. 20:3)] Ashtoreth [also called Astarte (Gr. name); a fertility goddess and consort of Baal (a fertility god); associated with fertility, love, and war; worship practices included lewd sexual rites] the goddess of the Sidonians, and Molech [the worship of Molech involved passing children through fire (Lev. 18:21; 20:2-5; 2 Kings 23:10; Jer. 32:35) as either a burnt offering to Molech or as a rite dedicating children to service of Molech] the detestable god of the Ammonites.

11:6 So Solomon did evil [by facilitating and participating in the worship of idols] in the eyes [everything we do is in the sight of God; no one can do anything “behind God’s back”] of the LORD [cf. Deut. 4:25]; he did not follow the LORD completely [the Lord requires our total allegiance (cf. Matt. 6:24)], as David his father had done.

11:7 On a hill east of Jerusalem [identified as the Hill of Corruption at the time Josiah destroyed the shrines Solomon built to the idols (cf. 2 Kings 23:13); the Mount of Olives], Solomon built a high place [a place where pagan gods were worshiped (most of these places were located on mountains or hills); the high places that Solomon built survived for approximately three centuries until the time of Josiah (2 Kings 23:13)] for Chemosh the detestable god of Moab [cf. 2 Kings 3:26-27], and for Molech the detestable god of the Ammonites.

Note: Solomon’s decision to build high places of worship for Ashtoreth, Chemosh, and Molech served as a stumbling block for Israel for approximately three centuries. How will our choices impact future generations?

Note: How could Solomon, who displayed such wisdom early in his reign, have acted so foolishly and sinfully toward the end of his life?

11:9 The LORD [does not tolerate idolatry; cf. Deut. 4:24] became angry [disobedience is costly] with Solomon because his heart had turned away from the LORD, the God of Israel, who had appeared to him twice [cf. 1 Kings 3:5 (beginning of his reign) and 1 Kings 9:2 (24 years later at dedication of temple); this wonderful privilege accentuated the grievous nature of Solomon’s sin; God had emphasized the importance of commitment to Him on the occasions He had appeared to Solomon (1 Kings 3:14; 9:4-9)].

11:10 Although he had forbidden Solomon to follow other gods, Solomon did not keep the LORD’S command [we must say “no” to God before we can say “yes” to sin].

11:11 So the LORD said to Solomon [no record that Solomon repented when confronted by the Lord], “Since this is your attitude and you have not kept my covenant and my decrees, which I commanded you, I will most certainly tear the kingdom away from you and give it to one of your subordinates [one who was serving Solomon; Jeroboam, head of the labor force of the tribes of Joseph (1 Kings 11:28), became king of the northern tribes after Solomon’s death (1 Kings 11:31,34-36; 12:20)].

Note: Does the severity of God’s judgment on Solomon for his disobedience challenge you to a higher level of commitment?

11:12 Nevertheless, for the sake of David your father, [note that God tempered His judgment on Solomon] I will not do it during your lifetime. I will tear it out of the hand of your son [Rehoboam (1 Kings 14:21)].

11:13 Yet I will not tear the whole kingdom from him, but will give him one tribe [Judah (the tribe of David); the Southern Kingdom] for the sake of David my servant and for the sake of Jerusalem, which I have chosen.”