B. He owned a vineyard that was located “beside the palace of Ahab king of Samaria” (21:1). The vineyard was in Jezreel, the site of one of Ahab’s palaces.

C. Naboth invoked the Lord’s name in 1 Kings 21:3 which may be an indication that he was a true worshipper of God and numbered among those who had not bowed the knee to Baal nor kissed the idol (see 1 Kings 19:18). 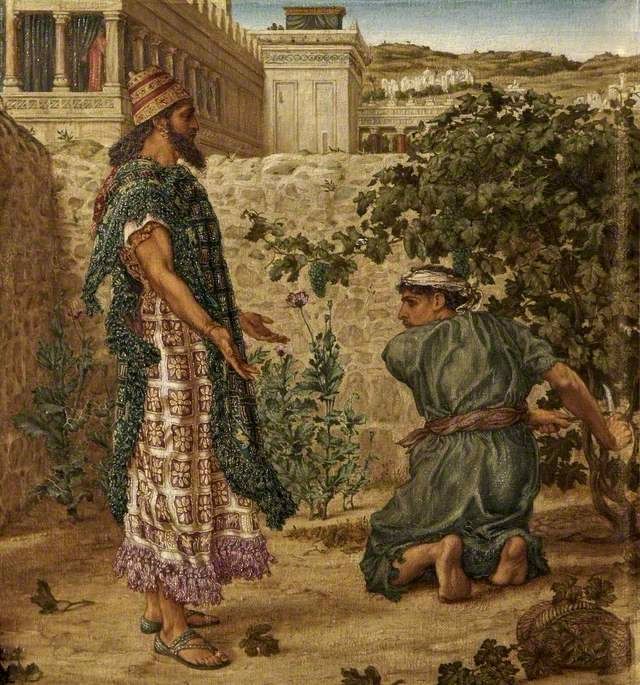 What request did Ahab make of Naboth?
The king asked Naboth for his vineyard because it was adjacent to his palace. Ahab wanted it for a vegetable garden. After his victory over Ben-hadad, Ahab seems to concern himself with the matter of expanding his personal estate. He offered Naboth a “better” garden in exchange or to buy it with money (21:2).

Why did Naboth refuse to give up or sell his vineyard?
The property was Naboth’s family inheritance. It was his ancestral property. According to the law (Leviticus 25:23-28 and Numbers 36:7-9) Naboth had to keep the land He could not sell it. Naboth’s reply is courageous because [1] he invoked the name of the Lord in the face of a monarch who worshipped Baal, and [2] because he refused Ahab’s request on the grounds that it was wrong because the law of God said it was wrong.

From a practical standpoint, it might have been expedient for Naboth to sell his property to the king. It might have gained him favor in the king’s eyes. It might have secured him a better parcel of land or perhaps wealth enough to retire comfortably. But Naboth did not yield to any temptation. He remained firm in his obedience to God’s law.

How did Ahab respond to Naboth’s refusal?
He went home and pouted. He “lay down on his bed and turned away his face and ate no food” (21:4). Ahab behaved like a spoiled child. Ahab was king over all Israel while Naboth was the owner of one small parcel of land. Proverbs 27;20 states, “Sheol and Abaddon are never satisfied, Nor are the eyes of man ever satisfied.” Someone stated, “Ahab cannot enjoy Israel if Naboth enjoy his vineyard.”

What did Jezebel do when Ahab reported the failed real estate deal to her?
She told Ahab to get up and start acting like a king and promised to secure the vineyard for her pouting husband (21:5-7). There is no record of Ahab trying to stop Jezebel from securing the vineyard. He knew that Naboth was the only obstacle to owning the vineyard. Ahab thus allowed Jezebel to exercise her wicked plan and secure the vineyard by whatever means possible. Jezebel contrived an evil plan to have Naboth killed (21:8-10). She set up a situation in which Naboth would be accused of having cursed both God and the king, an act punishable by death. Jezebel’s plot was carried out to the letter (21:11-13). Naboth was falsely accused and stoned to death. 2 Kings 9:26 indicates that Naboth’s sons were also put to death, thus leaving no one to lay legal claim to or inherit the property. (This is reminiscent of David’s plan to have Uriah killed in 2 Samuel 11:14-15.) Jezebel then told Ahab to go and claim his vineyard (21:15). Ahab, without remorse or thought that God had witnessed the crime, “arose to go down to the vineyard of Naboth the Jezreelite, to take possession of it” (21:16).

What did God, who took note of this heinous crime, instruct Elijah to do?
A. God instructed Elijah to go and meet Ahab in Naboth’s vineyard (21:18).

What was Ahab’s response when he saw Elijah?
He said, “Have you found me, O my enemy?” (21:20). Prior to the Mount Carmel experience, Ahab referred to Elijah as “the troubler of Israel” (18:17). Now, some seven years later, Ahab refers to Elijah as his personal enemy.

“Have you found me?” is another of the interesting questions of the Bible. Numbers 32:23b states, “and be sure your sin will find you out.” Yes, Elijah found Ahab just as surely as Nathan found David. When we sin against the Lord and continue in an unrepentant state, be sure that Elijah and Nathan will find you. God will tell them where to look!

What was Ahab’s response when he heard Elijah?
“He tore his clothes and put on sackcloth and fasted, and he lay in sackcloth and went about despondently” (21:27). Ahab humbled himself before God. Although it was too little too late, it was enough to cause God to mercifully postpone judgment until Ahab’s sons succeeded him to the throne (21:29). We have no record that Ahab’s repentance bore fruit. He still took possession of Naboth’s vineyard. He still allowed idol worship in Israel. He was still married to Jezebel.

Coveting can lead us into grievous sin.
God has given us clear instruction regarding the matter of coveting. Exodus 20:17 records His instruction, “You shall not covet your neighbor’s house; you shall not covet your neighbor’s wife or his male servant or his female servant or his ox or his donkey or anything that belongs to your neighbor.” Ahab ruled a kingdom and still coveted his neighbor’s small parcel of land. He had great possessions, but wanted just a little bit more. Proverbs 27:20 states, “Sheol and Abaddon are never satisfied, Nor are the eyes of man ever satisfied.” Covetousness led Ahab to allow Jezebel to implement her wicked plot to have Naboth and his sons killed. Covetousness can lead men into grievous sin.

There is no room for compromise when we have a clear word from God.
Naboth was unwilling to sell or trade his land because it was wrong according to God’s law. Naboth did not compromise what he knew God had instructed.

Be sure your sin will find you out.
The murderous crime of Ahab and Jezebel did not go unnoticed by God. God sent Elijah to find and confront Ahab about Naboth’s death. Elijah found Ahab just as surely as Nathan found David. When we sin against God and continue in an unrepentant state, God will send an Elijah or a Nathan to find us and confront us. We cannot hide from God.