Jeremiah 38:1-18
38:1 Shephatiah son of Mattan, Gedaliah son of Pashhur, Jehucal son of Shelemiah, and Pashhur son of Malkijah heard [Jeremiah’s message concerned/troubled those in high places] what Jeremiah was telling all the people when he said,

38:2 This is what the LORD says [cf. Jer. 21:9]: ‘Whoever stays in this city will die by the sword, famine or plague, but whoever goes over to [probably bears the sense “to desert to”; these words have a traitorous tone] the Babylonians will live. He will escape with his life; he will live.’

38:4 Then the officials said to the king, “This man should be put to death [an understandable request since Jeremiah’s words seemed traitorous]. He is discouraging [Jeremiah’s words had a demoralizing effect on the soldiers and people] the soldiers who are left in this city, as well as all the people, by the things he is saying to them. This man is not seeking the good of these people but their ruin.”

38:5 “He is in your hands,” King Zedekiah answered [his answer indicates that the real power lay with his officials]. “The king can do nothing to oppose you [he did not have the courage to stand up to those who wanted to put Jeremiah to death].” 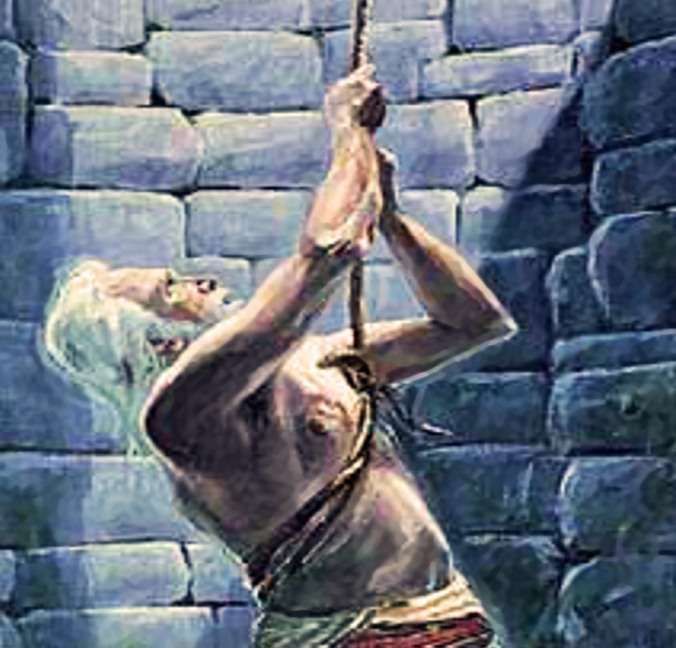 38:6 So they took Jeremiah and put him into the cistern [where he was sure to die a slow and painful death; cf. Ps. 69:14] of Malkijah, the king’s son, which was in the courtyard of the guard. They lowered Jeremiah by ropes [an indication that this particular cistern was deep] into the cistern; it had no water in it, only mud, and Jeremiah sank down into the mud [the only way for Jeremiah to survive was by standing or sitting upright].

38:7 But Ebed-Melech [name means “servant of the king” (i.e. God)], a Cushite [Ethiopian], an official [this word can also be translated as “eunuch”] in the royal palace [Eded-Melech may have been in the palace “for such a time as this”], heard that they had put Jeremiah into the cistern. While the king was sitting in the Benjamin Gate [the place where justice was dispensed (ironic because of the injustice he permitted Jeremiah to suffer)],

38:8 Ebed-Melech [a foreigner was the only one who made an attempt to rescue Jeremiah] went out of the palace and said to him [the king],

38:9 “My lord the king, these men have acted wickedly in all they have done [Eded-Melech courageously pointed out injustice] to Jeremiah the prophet. They have thrown him into a cistern, where he will starve to death [Jeremiah was as good as dead if left in the cistern] when there is no longer any bread in the city.”

38:10 Then the king [the king demonstrated a little courage at this point] commanded Ebed-Melech the Cushite, “Take thirty men from here with you and lift Jeremiah the prophet out of the cistern before he dies. [indicates that Ebed-Melech had influence with the king]”

38:11 So Ebed-Melech took the men with him and went to a room under the treasury in the palace. He took some old rags and worn-out clothes from there and let them down with ropes to Jeremiah in the cistern.

38:12 Ebed-Melech the Cushite said to Jeremiah, “Put these old rags and worn-out clothes under your arms to pad the ropes.” Jeremiah did so,

38:13 and they pulled him up with the ropes and lifted him out of the cistern. And Jeremiah remained in the courtyard of the guard [the reaction of Jeremiah’s enemies is not recorded].

38:14 Then King Zedekiah sent for Jeremiah [this was his last encounter with the king before Jerusalem fell] the prophet and had him brought to the third entrance [some believe that this was the king’s private entrance to the temple from the palace] to the temple of the LORD. “I am going to ask you something [Zedekiah sought a word (or an oracle) from God],” the king said to Jeremiah. “Do not hide anything from me.”

38:15 Jeremiah said to Zedekiah, “If I give you an answer, will you not kill me? Even if I did give you counsel, you would not listen to me.”

38:16 But King Zedekiah swore this oath [though Zedekiah was a moral weakling, Jeremiah trusted him to keep his oath] secretly to Jeremiah: “As surely as the LORD lives, who has given us breath, I will neither kill you nor hand you over to those who are seeking your life.”

38:17 Then Jeremiah said to Zedekiah, “This is what the LORD God Almighty, the God of Israel, says: ‘If you surrender to the officers of the king of Babylon, your life will be spared and this city will not be burned down; you and your family will live.

38:18 But if you will not surrender to the officers of the king of Babylon, this city will be handed over to the Babylonians and they will burn it down; you yourself will not escape from their hands.’”