36:1 In the fourth year of Jehoiakim [between Nisan (April) 605 BC and Nisan 604 BC] son of Josiah king of Judah, this word came to Jeremiah [the “weeping prophet”; a priest’s son; called of God around 627 BC to be His prophet; prophesied in Judah, calling nation to repentance; imprisoned because of his strong preaching] from the LORD [God told Jeremiah to put the spoken words into writing; Jeremiah dictated to Baruch (cf. vv. 4,21)]:

36:2 “Take a scroll [made of papyrus or leather sheets sewn together] and write [Jeremiah wrote at God’s initiative] on it all [all the messages God had given him from beginning of his prophetic ministry] the words [note that God’s revelation was in words (not in vague impressions) which a man recorded and God preserved] I have spoken [most of these messages recorded in the first twenty chapters of this book] to you concerning [pertaining to] Israel, Judah and all the other nations from the time I began speaking to you in the reign of Josiah [around 627 BC] till now [605 BC].

36:3 Perhaps when the people of Judah hear [when they gathered in the temple] about [God warned His people about the destructive consequences of their sin] every disaster I plan to inflict on them [unless they repented], each of them will turn from [purpose of Scripture was to encourage people to repent and thus to experience forgiveness] his wicked way; then I will forgive their wickedness and their sin.”

Note: What did Jeremiah identify as the purpose of God’s Word? How does God’s Word help people today to turn from disastrous courses?

36:4 So Jeremiah called Baruch [a trusted friend; personal secretary] son of Neriah, and while Jeremiah dictated all the words the LORD had spoken to him [to Jeremiah], Baruch wrote them on the scroll [some suggest the scroll was not large because it was read three times in a single day].

36:5 Then Jeremiah told Baruch, “I am restricted [it is likely that Pashhur restricted Jeremiah from the Temple (read Jer. 20:1-3)]; I cannot go to the LORD’S temple.

36:6 So you go to the house of the LORD on a day of fasting [fasts were often proclaimed on urgent occasions (cf. 1 Sam. 7:6; 2 Sam. 1:12; 12:16; 1 Kings 21:8-14); possible occasion for the fast was the fall of Ashkelon to Babylonian forces] and read to the people [an audience composed of citizens of Jerusalem and people from nearby towns] from the scroll the words of the LORD that you wrote as I dictated. Read them to all the people of Judah who come in from their towns.

36:7 Perhaps they will bring their petition before the LORD, and each will turn from his wicked ways, for the anger and wrath pronounced against this people by the LORD are great.”

36:8 Baruch son of Neriah did everything Jeremiah the prophet told him to do; at the LORD’S temple he read [this is the first reading of the scroll on that day (cf. vv. 8,15,21)] the words of the LORD from the scroll.

36:9 In the ninth month of the fifth year [(December) 604 BC] of Jehoiakim son of Josiah king of Judah, a time of fasting before the LORD was proclaimed for all the people in Jerusalem and those who had come from the towns of Judah.

36:10 From the room of Gemariah [name means “the Lord has accomplished”; likely was friendly to Jeremiah because Baruch was allowed to use his room] son of Shaphan [read 2 Kings 22:3–23:3; read the book of the law found during the temple restoration to King Josiah] the secretary, which was in the upper courtyard [a position overlooking the people gathered in the courtyards] at the entrance of the New Gate of the temple, Baruch read [approximately nine months after God command Jeremiah to record the message on a scroll] to all the people at the LORD’S temple the words of Jeremiah from the scroll.

36:11 When Micaiah [name means “who is like the Lord?”] son of Gemariah, the son of Shaphan, heard all the words of the LORD from the scroll,

36:12 he [Micaiah] went down [indicates the content of the message was disturbing enough for Micaiah to report to the palace] to the secretary’s [the state secretary] room in the royal palace, where all the officials [high government officials] were sitting: Elishama the secretary, Delaiah son of Shemaiah, Elnathan son of Acbor [held high office under Josiah (the previous king)], Gemariah son of Shaphan [served as state secretary under Josiah], Zedekiah son of Hananiah, and all the other officials.

36:13 After Micaiah told them everything [the message likely contained unpopular views or what was construed as anti-government statements concerning the coming destruction of the nation at the hands of the Babylonians] he had heard Baruch read to the people from the scroll,

36:14 all the officials sent Jehudi son of Nethaniah, the son of Shelemiah, the son of Cushi, to say to Baruch, “Bring the scroll from which you have read to the people and come.” So Baruch son of Neriah went to them with the scroll in his hand.

36:17 Then they asked Baruch, “Tell us, how did you come to write all this? Did Jeremiah dictate it?”

36:19 Then the officials said [because they did not expect that Jehoiakim would respond favorably to the message] to Baruch, “You and Jeremiah, go and hide [cf. Jer. 36:26]. Don’t let anyone know where you are.”

36:20 After they put the scroll in the room of Elishama the secretary, they went to the king in the courtyard and reported everything to him.

36:21 The king [Jehoiakim] sent Jehudi to get the scroll, and Jehudi brought it from the room of Elishama the secretary and read [this was the third reading of Jeremiah’s prophecies in one day (cf. vv. 8,15,21)] it to the king and all the officials standing beside him.

36:22 It was the ninth month [Chislev corresponds to parts of November and December] and the king was sitting in the winter apartment [sheltered section of king’s apartment facing winter sun], with a fire burning in the firepot in front of him.

36:23 Whenever Jehudi had read three or four columns of the scroll, the king [contrast the respect for God’s Word that Josiah, his father, had shown years before (2 Kings 22:11-20)] cut them off with a scribe’s knife and threw them into the firepot, until the entire scroll was burned in the fire [perhaps the king thought he could annul the power of the Word by burning the words].

Note: What are some ways in which people today reject God’s Word?

36:25 Even though [note that only three of those present objected to the king’s action] [1] Elnathan, [2] Delaiah and [3] Gemariah urged the king not to burn the scroll, he would not listen to them.

36:26 Instead, the king commanded Jerahmeel, a son of the king, Seraiah son of Azriel and Shelemiah son of Abdeel to arrest Baruch the scribe and Jeremiah the prophet [having destroyed the scroll, the king sought to destroy its author]. But the LORD had hidden them [cf. Jer. 36:19]. 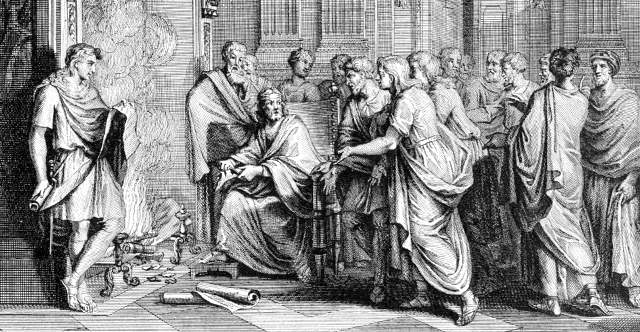 36:27 After the king burned the scroll containing the words that Baruch had written at Jeremiah’s dictation, the word of the LORD came to Jeremiah:

36:28 “Take another scroll and write [written words outlasted Jeremiah] on it all the words that were on the first scroll [cf. 36:32], which Jehoiakim king of Judah burned up.

Note: “Heaven and earth will pass away, but my words will never pass away.” (Matthew 24:35)

36:29 Also tell Jehoiakim king of Judah, ‘This is what the LORD says: You burned that scroll and said, “Why did you write on it that the king of Babylon would certainly come and destroy this land and cut off both men and animals from it?”

36:30 Therefore, this is what the LORD says about Jehoiakim king of Judah: He will have no one [his son Jehoiachin succeeded him as king and reigned only three months; Jehoiachin was deposed and died in exile (cf. 2 Kings 24:8,9; 25:27-30)] to sit on the throne of David; his [Jehoiakim] body will be thrown out [unburied] and exposed to the heat by day and the frost by night [cf. Jer. 22:18-19].

36:31 I will punish him and his children and his attendants for their wickedness; I will bring on them and those living in Jerusalem and the people of Judah every disaster I pronounced against them, because they have not listened.’”

36:32 So Jeremiah took another scroll and gave it to the scribe Baruch son of Neriah, and as Jeremiah dictated, Baruch wrote on it all the words of the scroll that Jehoiakim king of Judah had burned in the fire. And many similar words were added to them.