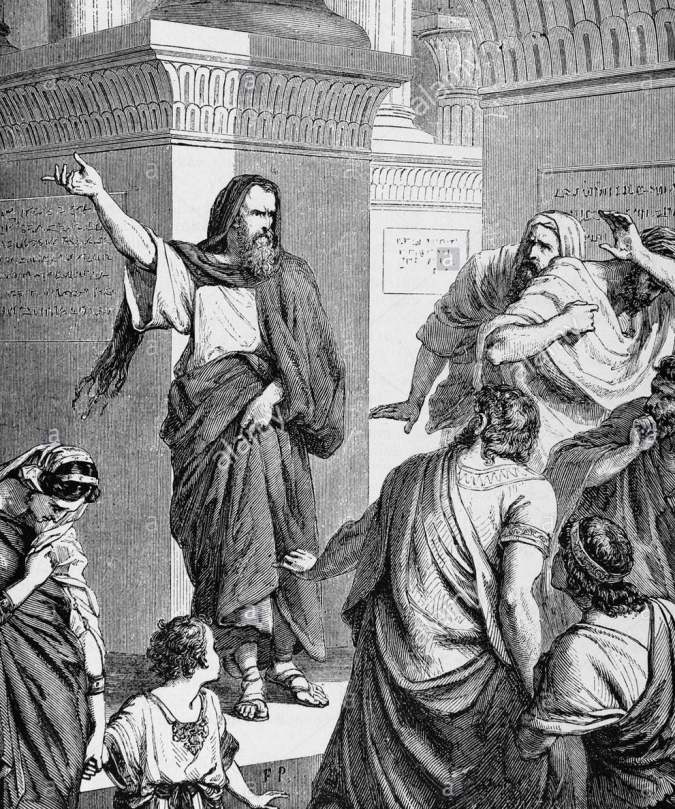 7:2 “Stand at the gate [probably one of the gates leading to the inner court] of the LORD’S house and there proclaim this message: “‘Hear the word of the LORD, all you people [the occasion for this sermon may have been one of the three feasts when visitors went to Jerusalem (cf. Ex. 23:14,17)] of Judah who come through these gates to worship [this is the topic of Jeremiah’s sermon; worship is not ceremony but a life totally dedicated to God] the LORD.

7:3 This is what the LORD Almighty, the God of Israel, says: Reform [a call to live according to the covenant] your ways [patterns of conduct] and your [personal; individual] actions, and I [God was in control] will [indicates God was in control] let you live in this place [in Jerusalem or in the promised land; cf. Jer. 7:7].

7:5 If [introduces condition for being spared from punishment] you really [genuinely] change your ways [moral character] and your actions and [conditions that apply to how they treated others] [1] deal with each other justly [protect the helpless; see v. 6; see also Jas. 1:27; content of justice expressed in negative terms in the following verse…],

7:6 if [2] you do not oppress the alien [those from other geographic regions with no legal status in the land; often the object of mistreatment], the fatherless [orphans or those without the basic needs for survival] or the widow [those without a husband to protect and care for them] and [3] do not shed innocent blood [probably refers to the miscarriage of justice (and not just the crime of murder); do not take advantage of or mistreat others, especially the weak] in this place, and [4] if you do not follow other gods [following other gods was the source of Judah’s social ills] to your own harm,

7:7 then [if conditions are met] I will let you live in this place [possibly the land, the city of Jerusalem, the temple], in the land [promised] I gave your forefathers for ever and ever.

7:10 and then come and stand before [implies submission or surrender] me in this house [much religion and little righteousness; the people tried to hide their sins behind their religion], which bears my Name, and say, “We are safe”—safe to do all these detestable [abominable] things [the evils referred to in Jer. 7:5-6,9]?

7:11 Has this house, which bears my Name, become a den [a secure place where thieves go between crimes] of robbers [cf. Matt. 21:13] to you? But I have been watching [we can never do anything behind God’s back; the fact that God was watching should have been an incentive to holy living]! declares the LORD.

7:13 While you were doing all these things, declares the LORD, I spoke [reference to divine warnings] to you again and again [God was persistent], but you did not listen [the people were arrogant and rebellious]; I called you, but you did not answer.

7:14 Therefore, what I did to Shiloh I will now do to the house that bears my Name, the temple you trust in, the place I gave to you and your fathers.

7:15 I will thrust you from my presence [God would send the people into exile], just as I did all your brothers, the people of Ephraim [the northern kingdom].’