18:2 “Go down to the potter’s [making of pottery an essential trade in ancient Israel] house, and there [a specific place] I will give you my message.”

18:3 So I went down to the potter’s house, and I saw him working at the wheel [literally “at the two stones”].

18:4 But the pot he was shaping [the potter exercises sovereignty over the clay] from the clay was marred [suggests imperfections in the clay (e.g., too much sand); quality of the clay determined what the potter could do with it; two possible meanings: “corrupted morally” (cf. Gen. 6:11) or “physically ruined” (cf. Jer. 13:7)] in his hands; so the potter formed it into another [not the particular vessel he had initially hoped to make] pot, shaping it as seemed best to him [yet another indication of the potter’s sovereignty over the clay].

18:5 Then [after observing the potter at work] the word of the LORD came to me: 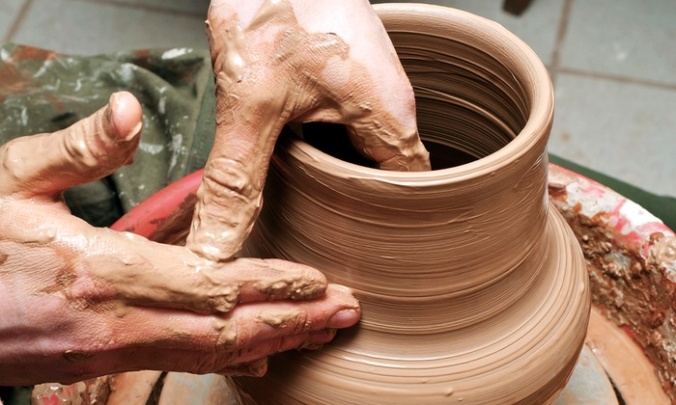 Note: Are you pliable or unpliable clay in the potter’s hands?

18:7 [note that the character of the clay determined what the potter could do with it] If at any time I announce that a nation [any people] or kingdom is to be uprooted, torn down and destroyed,

18:8 and if that nation I warned repents of its evil, then [God has the right and authority to forgive; He always acts according to His character] I will relent [Heb. “nacham” conveys idea of changing one’s course of action (and does not necessarily imply that the first action is inferior to the second)]; God can do so without compromising His sovereignty or holiness] and not inflict on it the disaster I had planned.

18:9 And if at another time I announce that a nation or kingdom is to be built up and planted,

18:10 and if it does evil in my sight and does not obey me, then I will reconsider the good I had intended to do for it.

Note: God will bless if we obey and punish if we disobey.

18:11 “Now therefore say to the people of Judah and those living in Jerusalem, ‘This is what the LORD says: Look! I am preparing [literally “shaping” (from same root as “potter”)] a disaster for you and devising a plan against you. So turn from your evil ways, each one of you, and reform [literally “make good”] your ways and your actions.’

18:12 But they will reply [note that the people had reached a point where they no longer had any desire to repent…], ‘It’s no use. We will [indication of a deliberate refusal to repent] continue with our own plans; each of us will follow the stubbornness of his evil heart.’”

18:13 Therefore this is what the LORD says: “Inquire among the nations [Heb. “goyim”]: Who has ever heard anything like this [a nation rejecting an opportunity to avoid the judgment and disaster brought on by stubborn rebellion]? A most horrible [utterly shocking] thing has been done by Virgin [virgin should keep herself clean for her future husband] Israel [term “Virgin Israel” was a reminder of the purity of their relationship at Mt. Sinai].

18:14 [the thought here is that nature is dependable and obeys God] Does the snow of Lebanon [word means “white”; snow-capped mountain range] ever vanish from its rocky slopes? Do its cool waters from distant sources ever cease to flow?

18:15 Yet my people [the Virgin Israel (Jer. 18:13)] have forgotten me; they burn incense to worthless [empty, vanity, nothingness] idols [Virgin Israel prostituted herself by worshipping idols], which made them stumble in their ways and in the ancient paths [the paths walked by those who were obedient to the covenant (cf. Jer. 6:16); the way of covenant obedience; the people would experience the curses of a broken covenant]. They made them walk in bypaths and on roads not built up [paths that lead nowhere].

18:16 Their land will be laid waste, an object of lasting scorn; all [future generations] who pass by will be appalled and will shake their heads [amazed that a people could have done such a thing to themselves].

18:17 Like a wind from the east [fierce and scorching sirocco wind from the desert; a symbol of destruction; unlike the west wind that swept in from the sea; the Babylonian army would be that hot wind bringing destruction], I will scatter them [those who have forgotten Him (Jer. 18:15)] before their enemies; I will show them my back [even as the people had turned their backs on Him; cf. Ps. 13:1; 27:8-9; Mic. 3:4; an expression of disapproval] and not my face in the day of their disaster.”