What initial trouble did Ahaziah face when he became king?
As soon as Ahab died Moab rebelled against Israel (2 Kings 1:1). The Moabites had been vassals to Israel since the time of David. They saw Ahab’s death as an opportunity to cast off their yoke of tribute.

What course of action did Ahaziah take to ascertain the outcome of his health?
Ahaziah sent messengers to the Philistine city Ekron to inquire of Baal-zebub (the lord of the flies) regarding whether he would recover from his injury (2 Kings 1:2). This action was a direct violation of the first commandment (Exodus 20:3) and the prohibitions of Leviticus 20:6 and Deuteronomy 18:14. This was nothing less than a public declaration that the king placed and sought the counsel of a Philistine god above the God of Israel. It is no wonder why Ahaziah “provoked the Lord God of Israel to anger” (1 Kings 22:53).

What course of action did God take to hold the king accountable for his foolish decision to send messengers to inquire of Baal-zebub?
God sent Elijah to intercept the king’s messengers. Elijah confronted them and asked, “Is it because there is no God in Israel that you are going to inquire of Baal-zebub, the god of Ekron?” (2 Kings 1:3). A convicting question, to say the least. Ahaziah did not turn to God in his distress, but to a heathen idol. Someone has said, “The man who has forsaken God is without refuge in his distress.”

Elijah then pronounced God’s judgment upon the wicked and idolatrous Ahaziah: “You shall not come down from the bed where you have gone up, but you shall surely die” (2 Kings 1:4). Elijah’s words made such an impression on Ahaziah’s messengers that they did not fulfill their errand, but returned at once to their bed-ridden king (2 Kings 1:5).

What did Ahaziah attempt to do to Elijah?
[A] Ahaziah decided to capture the prophet. He appointed “a captain of fifty with his fifty” (2 Kings 1:9) to find the prophet and bring him back to Samaria. They found Elijah, a lone figure on a hill, and commanded him to return with them to the king. Elijah instead called down fire from heaven, which consumed the entire military company (2 Kings 1:10).

What happened to Ahaziah? 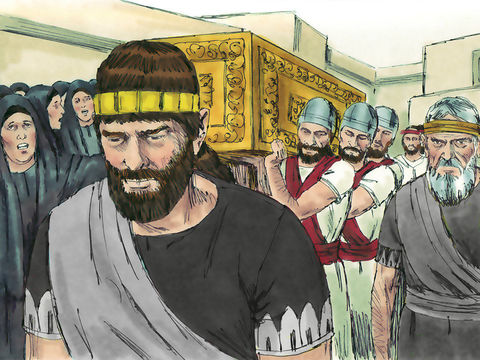 [B] Jehoram, Ahaziah’s younger brother, became king in his place because he had no son (2 Kings 1:17).

We should seek the Lord in times of distress.
When Ahaziah was severely injured as a result of a fall from an upper story chamber, he did not turn to the Lord. He sought the counsel of a pagan system and did not acknowledge the Lord in any way. Many people do not turn to the Lord in their distress but to the god of Ekron. Many people today turn to the Ekron god of their own resources and pride and try to deal with their distress with their limited strength and understanding. “The man who has forsaken God is [indeed] without refuge in his distress.”

God will hold men accountable for their insolent foolishness.
Ahaziah’s foolish action of seeking the counsel of a pagan idol did not go unnoticed by God. The king’s action declared that he did not acknowledge the God of Israel. Ahaziah’s blatant disregard for God and His Word brought a severe judgment upon him.