7:1 The word of the LORD [Ezekiel’s prophecy was not based on his own observations and conclusions, instead it came from the Lord] came [text does not specify how] to me: 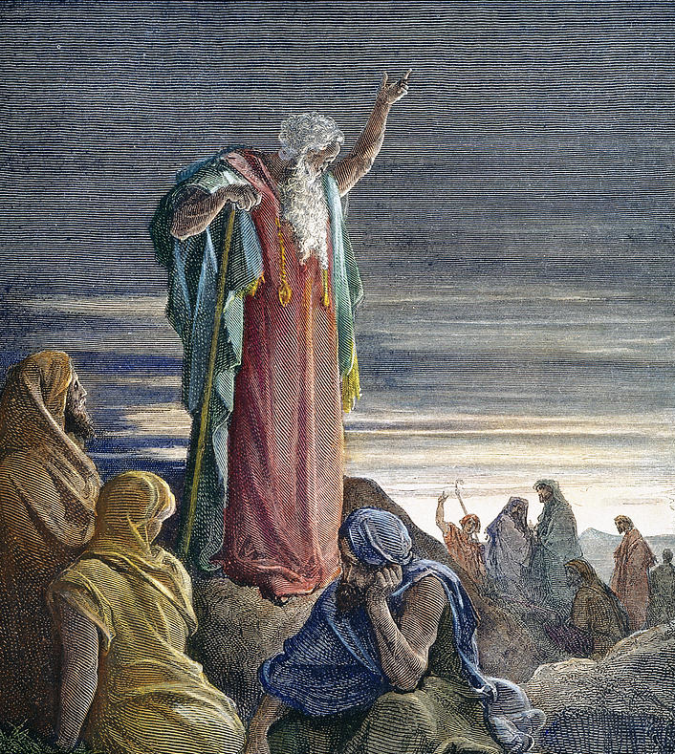 7:2 “Son of man [God never addressed Ezekiel by his proper name; this designation used 93 times], this is what the Sovereign LORD says to the land of Israel [this designation applied to Southern Kingdom of Judah after the Northern Kingdom fell]: The end [cf. Amos 8:2]! The end has come [although the actual end was yet several years in the future, this phrase indicates the certainty of God’s judgment] upon the four corners [may designate the four compass points; denotes that judgment would extend to Israel’s borders] of the land.

7:3 The end is now upon you [the land and its inhabitants] and I will unleash my anger against you. I will judge you according to your conduct and repay you for all your detestable practices.

7:4 I will not look on you with pity or spare you; I will surely repay you for your conduct and the detestable practices among you. Then you will know that I am the LORD.

7:5 “This is what the Sovereign LORD says: Disaster! An unheard-of [God’s judgment would be thorough] disaster is coming.

7:7 Doom has come upon you—you who dwell in the land. The time has come, the day is near; there is panic, not joy, upon the mountains.

7:8 I am about to pour out my wrath on you and spend my anger against you; I will judge you according to your conduct and repay you for all your detestable practices.

7:9 I will not look on you with pity or spare you; I will repay you in accordance with your conduct and the detestable practices among you. Then you will know that it is I the LORD who strikes the blow.

7:10 “The day is here! It has come! Doom has burst forth, the rod has budded, arrogance has blossomed!

7:11 Violence has grown into a rod to punish wickedness; none of the people will be left, none of that crowd—no wealth, nothing of value.

7:12 The time has come, the day has arrived. Let not the buyer rejoice nor the seller grieve, for wrath is upon the whole crowd.

7:13 The seller will not recover the land he has sold as long as both of them live, for the vision concerning the whole crowd will not be reversed. Because of their sins, not one of them will preserve his life.

7:14 Though they blow the trumpet and get everything ready, no one will go into battle, for my wrath is upon the whole crowd.

7:15 “Outside is [three words used to describe God’s judgment and that describe the horrors of siege warfare…] the [1] sword, inside are [2] plague and [3] famine; [God’s judgment would be inescapable regardless of where one lived…] those in the country will die by the sword [invading Babylonian army killed people in rural areas as they approached a city], and those in the city will be devoured by famine and plague.

7:16 All who survive and escape will be in the mountains [offered hiding places], moaning [this mournful sound would express the people’s guilt and grief] like doves of the valleys, each because of his sins [the people had brought judgment on themselves because of their sins].

7:17 Every hand will go limp, and every knee will become as weak as water.

7:18 They will put on sackcloth and be clothed with terror. Their faces will be covered with shame and their heads will be shaved.

7:19 [money would prove useless to those living in besieged cities…] They will [God’s judgment would bring a change in people’s values…] throw their silver into the streets, and their gold will be an unclean [filthy or vile] thing. Their silver and gold will not be able to save them in the day of the LORD’S wrath. They will not satisfy their hunger or fill their stomachs with it, for it has made them stumble into sin.

7:20 They were proud of their beautiful jewelry and [instead of using it to glorify God…] used it to make their detestable idols and vile images. Therefore I will turn these into an unclean thing for them.

7:21 I will hand [this expression emphasizes God’s initiative in Judah’s judgment] it [silver, gold, jewelry] all over as plunder to foreigners and as loot to the wicked of the earth, and they will defile [to profane or to treat something holy as common] it [Nebuchadnezzar looted temple (2 Kings 25:13-17) and placed items in pagan temple (Dan. 1:2) where they were later defiled by Belshazzar (Dan. 5:2-4)].

7:22 I will turn my face [refers to God’s presence with His people] away from them [just as they had abandoned God], and they will desecrate my treasured place; robbers will enter it and desecrate it.

7:23 “Prepare chains [probably refers to chains that held captives together], because the land is full of bloodshed [“crimes of bloodshed” (HCSB); cf. description of the pagan city of Nineveh in Nah. 3:1] and the city is full of violence [from Heb. word “hamas” (which denotes a terrorist organization today)].

7:24 [read God’s warning given centuries earlier in Lev. 26:27-33] I will bring the most wicked of the nations [Babylonia] to take possession of their houses; I will put an end to the pride of the mighty, and their sanctuaries will be desecrated.

7:25 When terror [times of destruction and uncertainty as a result of God’s judgment] comes, they will seek peace [the absence of war as well as inner peace; Heb. word “shalom” denotes wholeness and completeness], but there will be none.

7:26 Calamity upon calamity [expression emphasized the repeated nature of God’s judgment on His people] will come, and rumor upon rumor [the people would desperately search to find something on which to base hope]. [in their desperation the people would return to traditional ways of seeking God…] They will try to get a vision from the prophet [ironically, the people were in trouble because they had ignored the repeated warnings of God’s prophets]; the teaching of the law by the priest will be lost, as will the counsel of the elders [those who administered justice in local communities].

7:27 The king [lacking answers and ability to save his people] will mourn, the prince will be clothed with despair, and the hands of the people of the land will tremble. I will deal with them according to their conduct, and by their own standards I will judge them. Then [when God’s judgment had occurred] they will know that I am the LORD.”