3:1 King Nebuchadnezzar [king of Babylon] made an image [text does not reveal whether image was of the king or of a god (such as Babylon’s principal god Marduk); 3:28 seems to indicate image was of a god] of gold, ninety feet high and nine feet wide, and set it up on the plain [such a location would make the statue visible from a great distance] of Dura [likely was an area south of the city of Babylon] in the province of Babylon.

3:2 He then summoned the satraps [a Persian title meaning “protector of the realm” and referred to a ruler of a large area of the empire], prefects [a high-ranking official directly responsible to the satraps], governors [administrators of smaller regions or provinces], advisers [probably were counselors], treasurers [handled finances across the empire], judges [dealt with the law], magistrates [responsible for enforcing local laws] and all the other provincial officials to come to the dedication of the image he had set up.

3:3 So the satraps, prefects, governors, advisers, treasurers, judges, magistrates and all the other provincial officials assembled for the dedication of the image that King Nebuchadnezzar had set up, and they stood before it.

3:4 Then the herald [the official spokesman for public functions] loudly proclaimed, “This is what you are commanded to do, O peoples [included Greeks, Phoenicians, Jews, Arabs, Assyrians, Babylonians], nations and men of every language [official language spoken was Aramaic]:

3:5 As soon as you hear the sound of the [wind instruments…] horn, flute, [stringed instruments…] zither, lyre, harp, pipes [probably similar to a bagpipe] and all kinds of music [other instruments not specifically mentioned], you must fall down and worship the image of gold that King Nebuchadnezzar has set up.

3:6 Whoever does not fall down and worship will [note consequences of disregarding king’s orders] immediately be thrown into a blazing furnace [probably used to smelt ore for statue or for making bricks].”

3:7 Therefore, as soon as they heard the sound of the horn, flute, zither, lyre, harp and all kinds of music, all the peoples, nations and men of every language fell down and worshiped the image of gold that King Nebuchadnezzar had set up.

3:8 At this time some astrologers came forward and denounced the Jews.

3:10 You have issued a decree, O king, that everyone who hears the sound of the horn, flute, zither, lyre, harp, pipes and all kinds of music must fall down and worship the image of gold,

3:11 and that whoever does not fall down and worship will be thrown into a blazing furnace.

3:12 But there are some Jews whom you have set over the affairs of the province of Babylon—Shadrach, Meshach and Abednego—[1] who pay no attention to you, O king. They [2] neither serve your gods [3] nor worship the image of gold you have set up.”

3:14 and Nebuchadnezzar said to them [the king wanted to hear from these men whether they had refused to worship the statue], “Is it true, Shadrach, Meshach and Abednego, that you do not serve my gods or worship the image of gold I have set up?

3:15 Now [the king gave them a second chance to comply] when you hear the sound of the horn, flute, zither, lyre, harp, pipes and all kinds of music, if you are ready to fall down and worship the image I made, very good. But if you do not worship it, you will be thrown immediately into a blazing furnace. Then what god will be able to rescue you from my hand [the king could conceive of no power greater than his own or that of his gods]?”

3:16 Shadrach, Meshach and Abednego replied to the king, “O Nebuchadnezzar, we do not need to defend ourselves before you in this matter [obeying the king’s command would mean violating two of the Ten Commandments].

3:17 If we are thrown into the blazing furnace, the God we serve is able [if He pleases] to save us from it, and he will rescue us from your hand, O king.

3:18 But even if he does not [these men did not dictate to God what to do], we want you to know, O king, that we will not [the three men chose to die rather than deny the living God] serve your gods or worship the image of gold you have set up.”

3:19 Then Nebuchadnezzar was furious with Shadrach, Meshach and Abednego, and his attitude toward them changed. He ordered the furnace heated seven times hotter than usual

3:20 and commanded some of the strongest soldiers in his army to tie up Shadrach, Meshach and Abednego and throw them into the blazing furnace.

3:21 So these men [Shadrach, Meshach and Abednego], wearing their robes, trousers, turbans and other clothes, were bound and thrown into the blazing furnace [which the king ordered “heated seven times hotter than usual” (3:19); cf. Isa. 43:2].

3:22 The king’s command was so urgent and the furnace so hot that the flames of the fire killed the soldiers who took up Shadrach, Meshach and Abednego,

3:23 and these three men, firmly tied, fell [from the top into the furnace (shaped like an old-fashioned milk jug; ore added from the top and wood inserted through opening in the bottom)] into the blazing furnace.

3:24 Then King Nebuchadnezzar leaped to his feet in amazement [astonished; dazed; dismayed] and asked his advisers, “Weren’t there three men that we tied up and threw into the fire?” They replied, “Certainly, O king.” 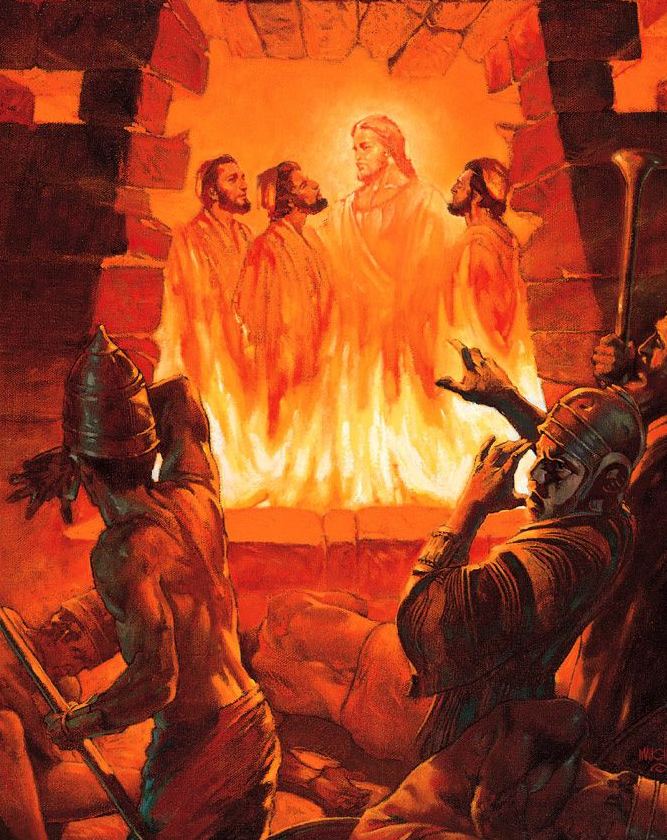 3:25 He said, “Look! I see four men walking around in the fire, unbound and unharmed, and the fourth looks like a son of the gods [not another human being but a god-like individual; some believe this was an angel; others believe this was a Christophany (an OT appearance of God’s Son in human form)].”

3:27 and the satraps, prefects, governors and royal advisers crowded around them. They saw [these officials were witnesses of their condition] that the fire had not harmed their bodies, nor was a hair of their heads singed; their robes were not scorched, and there was no smell of fire on them.

3:28 Then Nebuchadnezzar said, “Praise be to the God [not an expression of faith in God but perhaps an indication of the king’s willingness to add Israel’s God to his pantheon of gods] of Shadrach, Meshach and Abednego, who has sent his angel [messenger] and rescued his servants! They trusted in him and defied the king’s command and were willing to give up their lives rather than serve or worship any god except their own God.

3:29 Therefore I decree that the people of any nation or language who say anything against the God of Shadrach, Meshach and Abednego be cut into pieces and their houses be turned into piles of rubble, for no other god can save in this way.”

3:30 Then the king promoted Shadrach, Meshach and Abednego in the province of Babylon.