20:1 Now a troublemaker [literally “man of worthlessness” or “scoundrel”] named Sheba [a reckless person who took advantage of a tense situation (19:40-43) to call for secession] son of Bicri, a Benjamite [Saul’s tribe (1 Sam. 19:1)], happened to be there [in Gilgal (19:40-43)]. He sounded the trumpet [a ram’s horn] and shouted [Sheba exploited the Israelites jealousy of the men of Judah rather than helping to restore harmony], “We have no share in David, no part in Jesse’s son [likely said in a contemptuous and disparaging sense]! Every man to his tent, O Israel!”

20:2 So all the men of Israel deserted David to follow Sheba son of Bicri. But the men of Judah stayed by [literally “clung to” (cf. Ruth 1:14)] their king all the way from the Jordan to Jerusalem [a distance of approximately 17 miles].

20:3 David made provision for the 10 concubines he had left behind to take care of the palace (15:16). Absalom had raped these women when he seized power (16:22). David therefore abstained from sexual relations with them in accord with the law (Lev. 18:15).

20:4-5 David ordered Amasa (a cousin of Joab; replaced Joab as general) to assemble the men of Judah within three days to deal with Sheba. Amasa failed to meet the deadline.

20:6 David [acted immediately and decisively to deal with Sheba] said to Abishai [Joab’s brother and Amasa’s cousin; chosen by David to lead his forces against Sheba], “Now Sheba son of Bicri will do us more harm than Absalom did. Take your master’s men and pursue him, or he will find fortified cities and escape from us.”

20:14 Sheba continued to recruit volunteers for his revolt.

20:15 All the troops with Joab came and besieged Sheba in Abel Beth Maacah [located in far northern Israel near the city of Dan]. They built a siege ramp up to the city, and it stood against the outer fortifications. While they were battering the wall to bring it down,

20:16 a wise woman called from the city, “Listen! Listen! [words convey a sense of urgency] Tell Joab to come here so I can speak to him.”

20:17-18 The woman spoke personally with Joab about the welfare of her city and to assure him that the inhabitants of the city did not share Sheba’s views.

20:19 We are the peaceful and faithful in Israel. You are trying to destroy a city that is a mother in Israel [the woman cited the city’s cultural and historical value]. Why do you want to swallow up the LORD’S inheritance?”

20:21 [Joab explained Sheba’s crime to the woman] That is not the case. A man named Sheba son of Bicri, from the hill country of Ephraim, has lifted up his hand [rebelled; cf. 2 Sam. 18:28] against the king, against David. Hand over this one man, and I’ll withdraw from the city.” The woman said to Joab, “His [Sheba, the troublemaker whose presence threatened the lives of all the city’s citizens] head will be thrown to you from the wall.” 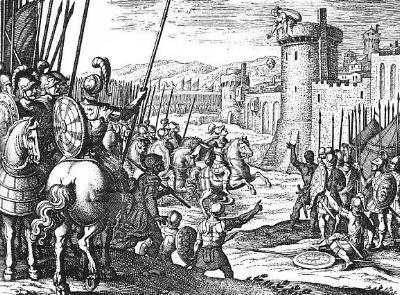 20:22 Then the woman went to all the people with her wise advice, and they cut off the head of Sheba son of Bicri and threw it to Joab. So he sounded the trumpet [to indicate the end of the battle and the end of the threatened rebellion], and his men dispersed from the city, each returning to his home. And Joab went back to the king in Jerusalem.

Note: Of what hostile situations are you aware of in your family, church, or community? What actions do you need to take to defuse these situations before they get out of hand?