Ezra: A Man Prepared for a Purpose

The Bible is clear about the fact that God works through people. When God was ready to deliver His people from Egyptian bondage, He worked through a man named Moses. A study of the life of Moses will reveal how God prepared him for what He had prepared for him. When Haman devised a diabolical plot to exterminate the Jews from the Persian Empire, God worked through Mordecai and Esther to foil Haman’s plans. When the time came for the Jews to be released from Babylonian captivity, God even worked through a heathen Persian king named Cyrus to accomplish His purpose.

In like manner, when the repatriates began to backslide and compromise the integrity of their faith, God used a man named Ezra to set the people back on course. Ezra was a man who was prepared for what God had prepared for him. He was a man prepared for a purpose. Our lesson today will introduce us to this remarkable man who is held in very high esteem in the Jewish hierarchy of great men. Our lesson today will again affirm the fact that God works through people!

The  Story Between Ezra 6 and 7

The first six chapters of the book of Ezra record the events of the first return of the exiles under the leadership of Sheshbazzar, whom King Cyrus of Persia appointed to govern Judah. The first group of repatriates were responsible for rebuilding the Temple that Nebuchadnezzar had destroyed in 586 B.C. They completed the Temple in the sixth year of Darius (515 B.C.).

Ezra 7-10 records the events of the second return of the exiles under the leadership of Ezra, the great spiritual leader who was concerned with teaching the people the Word of God, restoring proper worship, and dealing with the problem of intermarriage between the Jews and unbelieving Gentiles.

The story in Ezra 7 begins in the seventh year of Artaxerxes (458 B.C.). There is a “gap” of fifty-eight years between chapters 6 and 7 of Ezra. There are two references in Scripture that fill in the story between these chapters. First, Ezra 4:6 mentions the fact that the Jews continued to feel the malicious opposition of their enemies. Second, the book of Esther records events in Persia during the reign of Ahasuerus that had an impact on the Jewish people.

The Priestly Pedigree of Ezra
Ezra 7:1-5

Our first introduction to Ezra is in the seventh chapter of the book that bears his name. Ezra 7 begins with an account of Ezra’s priestly pedigree. This was an important matter to the Jews because it linked Ezra with Aaron, the first chief priest, thus establishing Ezra’s authenticity and credibility. Although greatly abbreviated, Ezra’s genealogy is a “who’s who” of important priests in Hebrew history.

The Preparation and Piety of Ezra
Ezra 7:6-10

Ezra 7:6 tells us of Ezra’s qualifications and the decree, which authorized his return to Jerusalem. Ezra’s priestly pedigree, preparation, and piety gave him credibility and uniquely qualified him to do God’s work. Notice that Ezra was “a scribe skilled in the law of Moses.” Ezra was an expert in the Mosaic Law. He was an interpreter and teacher of the law who had been trained to the point of proficiency. The Jewish historian Josephus tells us of Ezra’s piety. Josephus wrote that Ezra enjoyed a reputation in society for his integrity and the high qualities of his character.

Ezra 7:7-10 is a summary statement of Ezra’s journey from Babylon to Jerusalem. Ezra 7:10 reveals the key to Ezra’s success in life and in service. 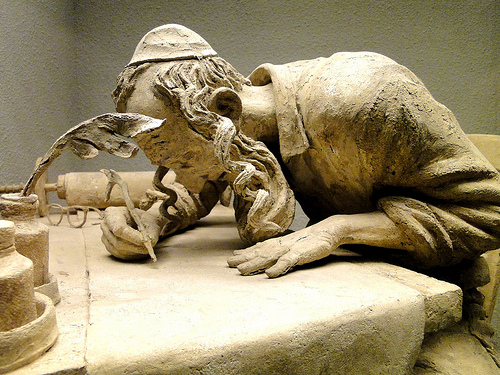 Notice that Ezra set his heart “to study the law of the Lord.” The word “study” means, “to seek.” Ezra put forth effort to study God’s Word.

Notice also that Ezra was determined to “practice” what he had learned through his study of God’s Word. Ezra was a doer of the Word (see James 1:22-25). He translated his discoveries into deeds!

Ezra was also determined to teach God’s Word in Israel. The order is important: Study, practice, and then teach!

Ezra 7:11-8:36 is an amplification of the summary or general comments of Ezra 7:6-10. Ezra 7:11-26 is a record of the decree of King Artaxerxes. This decree spelled out the scope of Ezra’s power and purpose.

First, it authorized the return of Ezra, and any Jews who wanted to accompany him, to Jerusalem.

Second, it authorized Ezra to investigate the state of affairs among the Jews in Judah.

Third, the decree provided for the needs of the Temple.

Fourth, Ezra was authorized to obtain whatever else he needed for the Temple at the expense of the royal treasury.

Fifth, those who worked in the Temple were granted a tax-exempt status.

Finally, Ezra was authorized to set up both a judicial and educational system.

Ezra 7:27-28 records the praise of Ezra following the king’s decree. This brief psalm of praise reveals several things about Ezra.

First, it reveals Ezra’s humility. There is not a hint of self-praise or self-commendation.

Second, it reveals his faith in God. Ezra acknowledged that it was God who had “put such a thing as this in the king’s heart.”

Third, it reveals Ezra’s understanding that God is the source of blessings. He acknowledged that God had extended lovingkindness to him before the king.

Finally, it reveals the fact that Ezra was strengthened and encouraged by God’s blessings.

It is important to have a purpose in life.
Ezra had a purpose in life. Ezra 7:10 summarizes Ezra’s purpose: To study, practice, and teach God’s Word to the people of Israel. Ezra’s purpose found expression in his practices and priorities. He practiced what he believed and made it a priority of his life to return to Jerusalem to teach the people God’s Word. Someone has said, “The only life worth envying is the one who has found a cause bigger than himself.” Ezra had a purpose/cause bigger than himself.

We must be careful to guard our influence in society.
We noted in our lesson that Josephus wrote that Ezra enjoyed a reputation in society for his integrity and the high qualities of his character. When the time came for Ezra to present his requests before the king we can be certain that the king took Ezra’s credibility into account. Ezra’s words were believable because his life was credible. Like Ezra, we should purpose to live our lives in obedience to God’s Word and so guard our witness and influence in our community. Only then will we be prepared for service and have credibility in service. We should be careful to guard our influence lest we be disqualified from service and ministry opportunities (see 1 Corinthians 9:24-27).