The Land of Beginning Again

The people of Israel were ready for a new beginning. They were ready to cast aside their past failures and sins like a shabby old coat at the door. The Old Testament book of Ezra records the events in the life of Israel after they had spent seventy years in Babylonian captivity. They had the opportunity to begin anew by returning to their homeland to rebuild their Temple, the walls of their beloved city of Jerusalem, and their lives.

Why did Israel need a new beginning? The answer is found in the pages of Israel’s tumultuous history. When Moses brought the children of Israel out of Egypt, God gave the people very specific commandments and instructions by which their lives were to be governed (see Exodus 20:3-23:33). God made very clear to the people that there were two possible paths of life – the path of obedience and the path of disobedience (see Deuteronomy 30:15-20). Each path led directly to specific consequences, those being life or death, blessing or curse.

Israel’s history chronicles their journey down both of these paths. For the most part however, Israel experienced a recurring cycle of apostasy, judgment, repentance, and deliverance. This cycle is best illustrated in the book of Judges where the dizzying details are recorded. Each new generation seemed to either ignore or forget the lesson of the earlier generation and consequently, the cycle was repeated. Israel’s proclivity to disobedience and idolatry continued through the Davidic and Solomonic kingdoms and throughout the period when the kingdom was divided into the Northern Kingdom of Israel and the Southern Kingdom of Judah.

The Babylonian Captivity was a trying, humiliating, and sorrowful experience for the Jews. They had to deal with radical changes in every area of their lives as well as cope with the pain of homesickness and feelings of bitterness and hatred toward their captors. Psalm 137 records the anguish of the captivity and the longing of the Jews for their release and return to Jerusalem, as well as their desire for calamity on the Babylonians. They had lost their freedom, were separated from friends and neighbors, and experienced the emotional trauma of seeing the Temple destroyed and the city of Jerusalem razed. We can only imagine how difficult this experience must have been to the Jews. Yet, it was all part of the harvest (Galatians 6:7)!

God Sets the Stage for a New Beginning

We have noted that the national and personal sins of the people brought the wrath and judgment of God. After their many years in exile however, it was time for them to experience the compassion and mercy of God. Through a series of events in the international political scene, Cyrus king of Persia successfully expanded his empire. The Babylonian Empire fell to Cyrus in 539 B.C.

The Person of Cyrus
Ezra 1:1

We are introduced to Cyrus in Ezra 1:1. He was the King of Persia who had overthrown Babylon and who ruled over a vast empire. Some two hundred years before Cyrus appeared on the political scene of the Ancient Near East, Isaiah prophesied that God would raise up a deliverer from the east and give him victory over the nations (Isaiah 41:2). Isaiah identified this deliverer by name – Cyrus! (see Isaiah 44:28 and 45:1). Isaiah further prophesied that Cyrus would let the exiles go free (Isaiah 45:13). 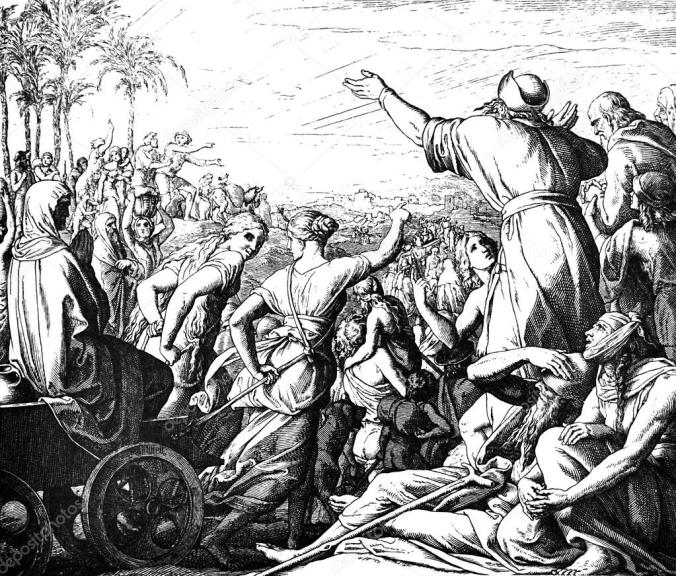 The Prophecy of Jeremiah
Ezra 1:1

Ezra 1:1 points out the fact that the actions of Cyrus fit into a larger scheme. Cyrus was serving a purpose bigger than his own, as indicated by the phrase, “in order to fulfill the word of the Lord by the mouth of Jeremiah.” The fulfillment of prophesy points out the fact that God is at work shaping history and directing human affairs. History has a purpose. History is actually “His story.”

The Proclamation of Release
Ezra 1:1-4

Ezra 1:1 tells us that God stirred up the spirit of Cyrus to issue a proclamation allowing all of the captive people within his empire to return to their homelands. In the case of the Jews Cyrus granted permission for them to return to Judah and to rebuild their Temple in Jerusalem.

The Patronage of the People and King
Ezra 1:5-11

There is one law that we cannot break: The Law of the Harvest!
The period of history after the Exodus and before the exiles is marked by the willful disobedience of the Israelites. Their sin eventually brought God’s judgment upon both the Northern and Southern Kingdoms as He allowed heathen nations to take them into captivity. The seeds of sin that were sown by so many generations eventually brought forth a painful harvest. Paul spoke of the law of the harvest in Galatians 6:7, “”Do not be deceived, God is not mocked; for whatever a man [or nation!] sows, this he will also reap.”

God’s discipline has a redemptive purpose.
God does not punish His people solely for the sake of punishment. God’s discipline and punishment of His people always has a redemptive purpose. The period that the Jews spent in captivity was painful and difficult, but it was a time when God had their attention and was able to do some wonderful things in their lives.

God is in control of history.
God has a purpose for mankind and for this world. History has a destination. God’s purposes are being worked out in history. We should never despair or think that events in this world have no relation to God’s purposes. God is able to use even the most unlikely events to accomplish His purposes.

“For all things are Thy servants.” (Psalm 119:91b)
God can use anyone or anything He so desires to accomplish His purposes. In the case of the erring Balaam, God used “a dumb donkey, speaking with the voice of a man” (II Peter 2:16) to restrain his madness. God can use a drunk on the street to convict you that you shouldn’t drink. In the case of Israel, God even used heathen nations and rulers to fulfill His purposes for His people. King Cyrus thought that he was serving his own interests, but he was unknowingly serving the interests of God.