2 Samuel 11:1-5
11:1 In the spring [literally “at the return of the year”], at the time when kings go off to war, David sent Joab out with the king’s men [David’s own small standing army] and the whole Israelite army [common working people who served as soldiers]. They destroyed the Ammonites [probably indicates total conquest of Ammonite territory east of Jordan River] and besieged Rabbah [Ammon’s capital city]. But David remained [to administer the kingdom; David not needed in battle] in Jerusalem. 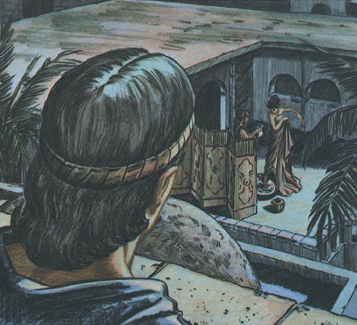 11:2 One evening David got up from his bed and walked around [paced back and forth; no indication given that David went to his roof looking for temptation] on the roof of the palace. From the roof he saw a woman bathing [literally “washing”]. The woman was very beautiful [literally “very good of appearance”],

Note: What are some situations that lead adults today into the trap of sexual immorality? Why is it important to decide beforehand how we will act in certain situations?

11:3 and David [note that he took the situation to the next level…] sent someone to find out about her. The man said, “Isn’t this Bathsheba, the daughter of Eliam [the son of Ahithophel, one of David’s chief advisors] and the wife of Uriah the Hittite [a member of David’s elite guard along with Eliam (2 Sam. 23:39); Uriah was away at war making it easy for David to take advantage of Bathsheba]?”

11:4 Then David [had many wives to satisfy his sexual desires] sent [intentional action; David acted on his lust (cf. Matt. 5:27-28) and initiated the events that led to adultery] messengers to get her [the sole wife of another]. She came to him, and he [like David, we must say no to God before we can say yes to sin] slept with her [no indication that she cried out for help when David’s intentions became clear (cf. Deut. 22:23-24)]. (She had purified herself from her uncleanness [following her menstruation (cf. Lev. 15:19-33); time of her ovulation near and likelihood for pregnancy high].) Then she went back home [David probably felt the matter was now closed].

Note: How might our sin drag others into trouble? How does Satan tempt us to believe that our sin is our private decision? Why do you think believers choose to sin knowing the pain inflicted on others?

11:5 The woman conceived and sent word to David, saying, “I am pregnant [David’s secret was about to become visible].”

2 Samuel 11:14-17
11:14 In the morning David wrote a letter [David’s intentional and final action to deal with Uriah after two previous failed attempts to give Uriah opportunity to have sexual relations with his wife (cf. 2 Sam. 11:6-13); this letter was an abuse of royal power] to Joab and sent it with Uriah [David felt confident that Uriah would not break the seal of the letter to read it (a testimony to Uriah’s honesty and integrity); Uriah never knew or suspected he carried his own death sentence].

11:15 In it he wrote, “Put Uriah in the front line where the fighting is fiercest. Then withdraw from him so he will be struck down and die.” [Joab followed David’s instructions, even though in so doing other soldiers were also killed]

Note: What are some common results of attempting to cover up sins? Why do we sometimes attempt to cover our sins? Why does one person’s sin sometimes affect many others?

11:16 So while Joab had the city under siege, he [Joab chose loyalty to the king over loyalty to his own conscience; perhaps Joab chose to follow the king’s orders knowing that by doing so it would strengthen his own position with the king] put Uriah at a place where he knew the strongest defenders were.

11:17 When the men of the city came out and fought against Joab, some of the men in David’s army fell; moreover, Uriah the Hittite died [as a casualty of war].