2 Samuel 3:1
3:1 The war [civil war that broke out after the men of Judah anointed David as their king] between the house of Saul and the house of David lasted a long time [throughout the two-year reign of Ish-Bosheth (2:10)]. David grew stronger and stronger, while the house of Saul grew weaker and weaker [cf. 2 Sam. 2:30-31]. 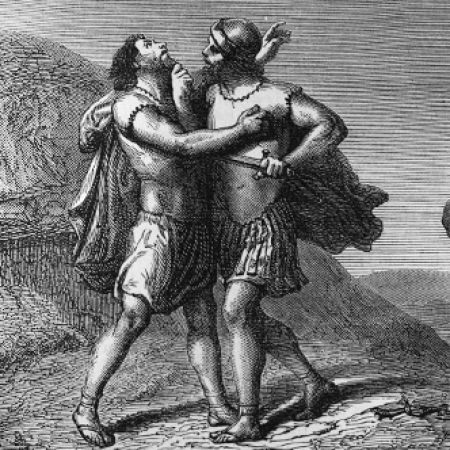 3:27 Now when Abner [the general of Ish-Bosheth’s army who had killed Asahel in battle (2:23); Asahel was the brother of Joab, David’s general (2:18-23)] returned [David had earlier sent Abner away in peace (3:22-23)] to Hebron, Joab [did not trust Abner when Abner transferred his allegiance from Ish-Bosheth to David (cf. 3:12-25)] took him aside into the gateway [designates one of the chambers in Hebron’s main city gate], as though to speak with him privately. And there, to avenge [indicates that Joab never forgave Abner for killing his brother] the blood of his brother Asahel, Joab stabbed him in the stomach, and he died.

Note: How did Joab fail to demonstrate integrity? Can a life of integrity allow a place for vengeance? Read Romans 12:19.

2 Samuel 3:31-32
3:31 Then David [strongly disapproved of what Joab had done (3:28-29)] said to Joab [David instructed to Joab to follow appropriate mourning customs for the man he had murdered (no doubt a humiliating experience for Joab); Joab would later pay for his crime (cf. 1 Kings 2:5-6,31-34)] and all the people with him, “Tear your clothes and put on sackcloth and walk in mourning in front of Abner.” King David [demonstrated deep respect and genuine grief] himself walked behind the bier [the burial bed or board on which Abner’s body lay].

3:32 They buried Abner in Hebron, and the king wept [for an enemy who had become an ally] aloud at Abner’s tomb. All the people wept also.

2 Samuel 3:36-37
3:36 All the people took note [of David’s lament and fasting (3:33-35)] and were pleased [with David’s reaction to Abner’s death]; indeed, everything [David’s consistent and godly lifestyle and actions revealed his integrity] the king did pleased them.

3:37 So on that day all the people [refers to the people of Judah] and all Israel [refers to people from the other tribes] knew that the king had no part in the murder of Abner son of Ner.