1:1 In the days when the judges ruled, [a turbulent period characterized by lawlessness, immorality, idolatry, war, and chaos in Israel according to Judges 21:25] there was a famine in the land [a natural catastrophe], and a man from Bethlehem in Judah, together with his wife and two sons, went to live for a while [as resident aliens] in the country of Moab [in expectation of a fuller life. Moab was located thirty-five miles southeast of Bethlehem, on the east side of the Dead Sea.].

1:2 The man’s name was Elimelech [name meaning, “My God is King”], his wife’s name Naomi [name meaning “pleasant” or “lovely”], and the names of his two sons were Mahlon and Kilion. They were Ephrathites from Bethlehem [Bethlehem was also known as Ephrath according to Genesis 35:19], Judah. And they went [eastward across the Jordan River] to Moab and lived there.

1:3 Now Elimelech, Naomi’s husband, died [after an undetermined period of time], and she was left with her two sons.

1:4 They married Moabite women [the law did not expressly forbid Israelites to marry Moabites according to Deuteronomy 7:1-3], one named Orpah [married Kilion] and the other Ruth [Hebrew name meaning “friendship” or “association.” Ruth married Mahlon according to Ruth 4:10.]. After they had lived there about ten years,

1:5 both Mahlon and Kilion also died, and Naomi was left without her two sons and her husband [a desperate situation for a woman, especially in a foreign country].

1:6 When she heard in Moab that the Lord had come to the aid of His people by providing food for them, Naomi and her daughters-in-law [Orpah and Ruth were prepared to leave their own land and accompany Naomi] prepared to return home [a journey of about 50 or 60 miles] from there.

1:7 With her two daughters-in-law she left the place where she had been living and set out on the road that would take them back to the land of Judah [perhaps they had only traveled a short distance when Naomi urged her daughters-in-law to return to their mother’s home].

1:8 Then Naomi said to her daughters-in-law, “Go back, each of you, to your mother’s home. May the Lord show kindness [Hebrew — “chesed” which refers to “deeds of mercy performed by a more powerful party for the benefit of a weaker one”] to you, as you have shown to your dead and to me.

1:9 May the Lord grant that each of you will find rest [security, not necessarily freedom from work] in the home of another husband.” Then she kissed them and they wept aloud

1:10 and said to her, “We [Both Orpah and Ruth pledged to stay with Naomi. This speaks highly of both Naomi and her daughters-in-law.] will go back with you to your people.”

1:11 But Naomi said, “Return home [Naomi unselfishly considered the welfare of her daughters-in-law above her own.], my daughters. Why would you come with me? Am I going to have any more sons [Assumes the law of levirate marriage in which these sons would be obligated to marry the childless widows of their older brothers and, by so doing, provide an heir to their brother’s name and heritage. See Deuteronomy 25:5-10.], who could become your husbands?

1:12 Return home, my daughters; I am too old to have another husband. Even if I thought there was still hope for me — even if I had a husband tonight and then gave birth to two sons —

1:13 would you wait until they grow up? Would you remain unmarried for them? No, my daughters. It is more bitter for me than for you [because Naomi’s daughters-in-law were still young enough to remarry and find happiness and security], because the Lord’s hand has gone out against me! [Naomi believed that nothing happened by chance. The prevailing thought of the day was that life’s difficulties were punitive acts of God.]”

1:14 At this they wept again [because of the apparent hopelessness of their situation]. Then Orpah [reluctantly obeyed Naomi’s wishes] kissed her mother-in-law good-by, but Ruth clung to her.

1:15 “Look,” said Naomi, “your sister-in-law is going back to her people and her gods [By returning to her people Orpah also returned to the gods worshiped by her people. Chemosh was the god of the Moabites. A common belief was that deities were restricted by geographical boundaries.]. Go back with her.” 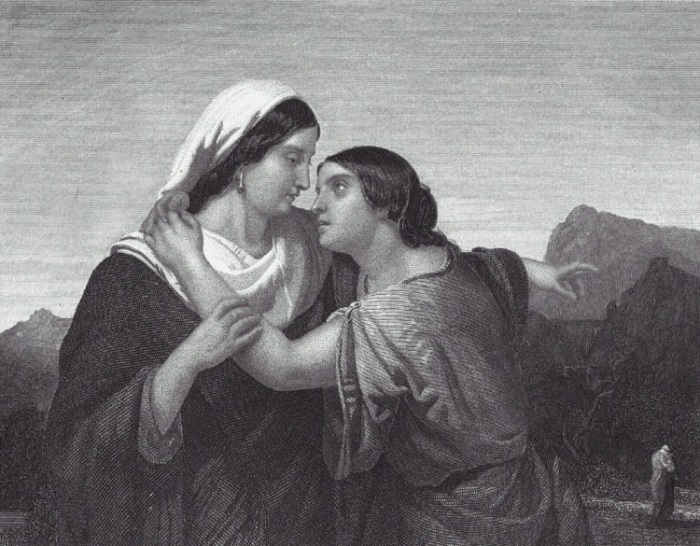 1:16 But Ruth [in contrast to Orpah] replied, “Don’t urge me to leave you or to turn back from you [Ruth made a commitment to go with Naomi and share both her home and whatever circumstances they might encounter.]. Where you go I will go, and where you stay I will stay. Your people will be my people and your God my God [Ruth renounced both her people and gods. Ruth’s decision to stay with Naomi and to embrace Naomi’s people and God reveals her noble character.].

1:17 Where you die I will die [death would be the only thing to separate Ruth from Naomi], and there I will be buried. May the Lord deal with me, be it ever so severely, if anything but death separates you and me [Ruth swore a curse on herself if she did not keep her promise to Naomi.].”

1:18 When Naomi [It is noteworthy that Naomi’s life and example so impressed Ruth that Ruth was willing to abandon her homeland and her gods.] realized that Ruth was determined to go with her, she stopped urging her.

1:19 So the two women went on [the journey was likely very dangerous for these two unaccompanied women] until they came to Bethlehem [located about five miles south of Jerusalem]. When they arrived in Bethlehem, the whole town was stirred [buzzed with commotion] because of them, and the women exclaimed, “Can this be Naomi? [this is exclamatory rather than interrogative]”

1:20 “Don’t call me Naomi,” she told them. “Call me Mara [meaning “bitter,” as in Exodus 15:23], because the Almighty [Shaddai] has made my life very bitter [This was not a complaint but an acknowledgment of God’s sovereign control of all things. Naomi did not yet realize how God would work all of the experiences she said made her life bitter into something better.].

1:21 I went away full [not a reference to possessions but to family], but the Lord has brought me back empty [widowed and childless]. Why call me Naomi? The Lord has afflicted [caused evil or testified against] me; the Almighty has brought misfortune upon me [reflects a common Israelite belief that God blessed the righteous and brought calamity on the unrighteous].”

1:22 So Naomi returned from Moab accompanied by Ruth the Moabitess, her daughter-in-law, arriving in Bethlehem as the barley harvest [prepares us for the events of chapter 2] was beginning [near the end of April. The two widows arrived in Bethlehem at an opportune time. Their need for food would be satisfied by gleaning in harvest fields.].