Judges 5:1-11
5:1 [a poetic description of the events in chapter 4; cf. song of Moses in Ex. 15] On that day Deborah and Barak son of Abinoam sang [Heb. word means “to sing with a stringed instrument”] this song: 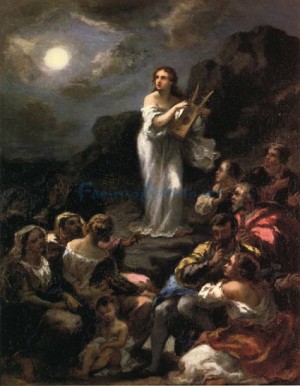 5:2 “When the princes in Israel take the lead [military leaders willing to fight against Sisera], when the people [10,000 soldiers] willingly offer [volunteer] themselves—praise the LORD [the theme of this chapter]!

5:4 “O LORD, when you went out from Seir, when you marched from the land of Edom, the earth shook, the heavens poured, the clouds poured down water.

5:6 [a description of the conditions that existed under Canaanite oppression] “In the days of Shamgar [a judge] son of Anath, in the days of Jael [the woman who killed Sisera (cf. 5:24-27)], the roads [the highways were controlled by the Canaanites who exploited travelers] were abandoned; travelers [caravans and individual travelers] took to winding paths [the back roads].

5:7 Village [small settlement that had no defensive wall] life in Israel ceased [people did not work in their fields for fear of the Canaanites], ceased until I, Deborah, arose [in the midst of Israel’s plight], arose a mother [a title of honor; evident in her concern and courage] in Israel.

5:8 When they [the Israelites] chose new gods [Canaanite idols such as Baal and Asherah], war [the judgement and discipline of the Lord] came to the city gates, and [note that Israel was powerless before attacking enemies] not a shield or spear was seen among forty thousand in Israel.

5:9 My heart is with Israel’s princes [governors; military leaders], with the willing volunteers among the people. Praise the LORD [this is the theme of this chapter]!

5:10 “You who ride on white donkeys, sitting on your saddle blankets, and you who walk along the road, consider