Joshua 6:1-5
6:1 Now Jericho [the first walled city the Israelites had ever encountered] was tightly shut up [and fortified] because of the Israelites [news of Israel’s victories east of the Jordan had already reached Jericho; cf. Ex. 23:27]. No one went out and no one came in [indicates how desperate the situation was].

6:2 Then the LORD said to Joshua [important that leaders receive their orders from the Lord], “See, I have delivered [indicated Jericho already belonged to Israelites; guaranteed victory; “Remember that you fight from victory, not just for victory.” (Wiersbe)] Jericho into your hands, along with its king and its fighting men.

Note: “You are a poor soldier of Christ if you think you can overcome without fighting, and suppose you can have the crown without the conflict.” (John Chrysostom (347-407) Syrian preacher and martyr)

6:3 March [this was not a military strategy but rather one that would call for people to act in faith; a seemingly foolish plan; God’s wisdom is far above ours (cf. Isa. 55:8-9)] around the city once with all the armed men. Do this for six days.

Note: Three ways to do God’s work: “One is to make the best plans we can, and carry them out to the best of our ability … or, having carefully laid our plans and determined to carry them through, we may ask God to help us, and to prosper us in connection with them. Yet another way of working is to begin with God; to ask His plans, and to offer ourselves to Him to carry out His purposes.” (Hudson Taylor • China Inland Mission)

6:4 Have seven [“seven” (Heb. shevah) is the number of divine perfection or completion] priests carry trumpets [typically used to call an assembly, to sound battle signal, and also used in religious observances] of rams’ horns [Heb. jobel (root of the word jubilee)] in front of the ark [represented God’s presence with His people]. On the seventh day, march around the city seven [not “once” as in previous six days] times, with the priests blowing the trumpets.

6:5 When you hear them sound a long blast on the trumpets, have all the people [the whole army] give a loud shout [a battle cry to encourage one another and to intimidate enemy]; then [after God’s instructions followed totally] the wall of the city will [certainty] collapse [thus removing barrier and making city vulnerable to attack] and the people will go up, every man straight in.”

Joshua 6:14-27
6:14 So on the second day they marched around the city once and returned to the camp. They did this for six days [indicates they persisted in obedience; helped people learn patience].

6:16 The seventh time around, when the priests sounded the trumpet blast, Joshua commanded the people, “Shout! For the LORD has [indicates victory already won] given [victory was a gift from God] you the city!

6:18 But keep away from the devoted things [a specific command], so that you [a reminder that the sin of an individual has consequences for others] will not bring about your own destruction by taking any of them [only Achan violated this command (Josh. 7)]. Otherwise you will make the camp of Israel liable to destruction and bring trouble on it.

Note: “Let us be as watchful after the victory as before the battle.” (Andrew Bonar)

6:19 All [without exception] the silver and gold and the articles of bronze and iron are sacred to the LORD and must go into his treasury.” 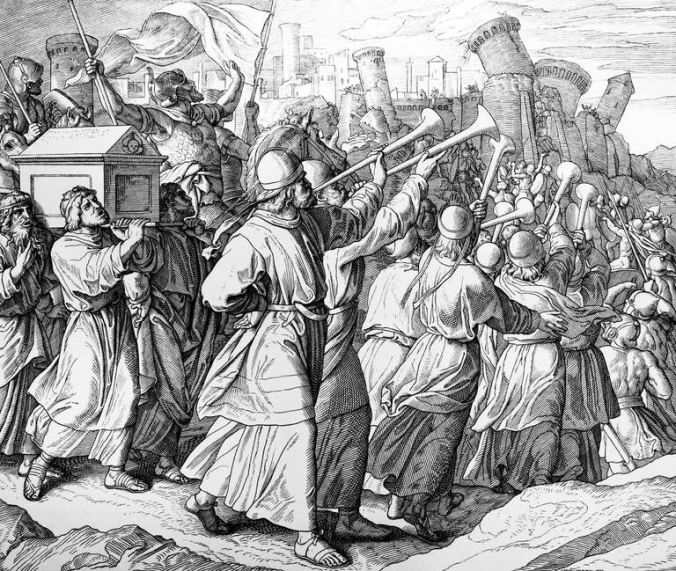 6:20 When the trumpets sounded, the people shouted, and at the sound of the trumpet, when the people gave a loud shout, [after God’s instructions had been carefully followed, then…] the wall collapsed; so every man charged straight in, and they took the city.

Note: “The only way to grow in faith is to accept new challenges and trust God to give you victory.” (Wiersbe • Be Strong • p. 78)

6:21 They devoted the city to the LORD and destroyed with the sword every [emphasizes totality of the destruction] living thing in it—men and women, young and old, cattle, sheep and donkeys.

6:22 Joshua said to the two men who had spied out the land,”Go into the prostitute’s house and bring her out and all who belong to her, in accordance with your oath to her.”

6:23 So the young men who had done the spying went in and brought out Rahab, her father and mother and brothers and all who belonged to her. They brought out her entire family and put them in a place outside the camp of Israel.

Then they burned the whole city and everything in it, but they put the silver and gold and the articles of bronze and iron into the treasury of the LORD’S house [the tabernacle].

6:25 But Joshua spared Rahab the prostitute, with her family and all who belonged to her, because she hid the men Joshua had sent as spies to Jericho—and she lives among the Israelites to this day [either means this account was written while Rahab was still living or that Rahab lived on in her posterity].

6:26 At that time Joshua pronounced this solemn oath [cf. 1 Kings 16:34]: Cursed before the Lord ids the man who undertakes to rebuild this city, Jericho:

6:27 So the LORD was with Joshua, and his fame spread throughout the land.