42:2 He continued, “I have heard that there is grain in Egypt. Go [from Canaan] down there [to Egypt] and buy some [grain] for us, so that we may live and not die.”

42:3 Then ten of Joseph’s brothers [the sons of Jacob] went down to buy grain from Egypt.

42:4 But Jacob did not send Benjamin [the youngest of his sons; younger son of Rachel, Jacob’s favorite wife], Joseph’s brother, with the others, because he was afraid that harm might come to him.

42:5 So Israel’s sons were among those who went [indicates that others also went from Canaan to Egypt to buy grain] to buy grain, for the famine was in the land of Canaan also. 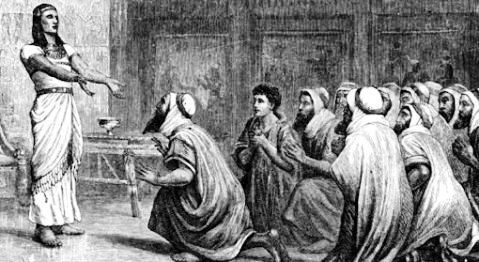 42:7 As soon as Joseph saw his brothers [first time Joseph had seen his brothers since they had sold him into slavery] he recognized them, but he pretended to be a stranger [perhaps Joseph feared his brothers might recognize him] and spoke [Joseph spoke through an interpreter (cf. Gen. 42:23)] harshly [Joseph spoke with authority] to them. “Where do you come from?” he asked. “From the land of Canaan,” they replied, “to buy food.”

42:8 Although Joseph recognized his brothers, they did not recognize him [Joseph was 17 years old when sold into slavery almost twenty years earlier; Joseph dressed in royal Egyptian garb and spoke through an interpreter].