32:2 When Jacob saw them, he said, “This is the camp of God!” So he named that place Mahanaim. 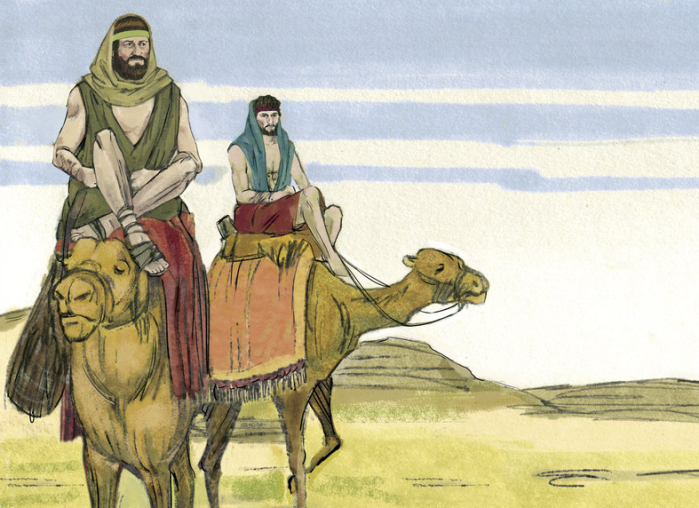 32:3 Jacob sent [we should take the initiative in resolving conflict (cf. Matt. 5:23-24; Matt. 18:15-17; Col. 3:12-14)] messengers ahead of him to his brother Esau in the land of Seir [a region southeast of the Dead Sea], the country of Edom [an area southeast and southwest of the Dead sea characterized by red sandstone terrain; Edom from Semitic root which means “red”].

32:4 He instructed them: “This is what you are to say to my master [a term of respect; addressing Esau in this way would tell Esau that Jacob recognized him as the older brother and a person of value] Esau: ‘Your servant [an indication of humility and desire to serve his older brother; indicates a change in Jacob’s heart] Jacob says, I have been staying with Laban [their mother Rebekah’s brother (Gen. 24:29) and father of Leah and Rachel (Gen. 29:16)] and have remained there till now [a period of 20 years].

32:5 I have cattle and donkeys, sheep and goats, menservants and maidservants [this inventory would indicate to Esau that God had been good to Jacob]. Now I am sending this message to my lord, that I may find favor in your eyes [Jacob wanted to make peace with his estranged brother; cf. Prov. 18:19].’”

32:6 When the messengers returned to Jacob, they said, “We went to your brother Esau, and now he is coming to meet you, and four hundred men are with him.”

32:7 In great fear and distress Jacob divided the people who were with him into two groups, and the flocks and herds and camels as well.

32:8 He thought, “If Esau comes and attacks one group, the group that is left may escape.”

32:9 Then Jacob prayed [an important step in dealing with broken relationships], “O God of my father Abraham, God of my father Isaac [this form of address recalled the faithfulness of God to Abraham and Isaac], O LORD, who said to me [Jacob reminded God of what He had commanded him to do (and how obeying that command now put him at risk)], ‘Go back to your country and your relatives, and I will make you prosper,’

32:10 I [the one who was a master manipulator and deceiver] am unworthy [Jacob approached God in humility; Jacob felt that he was too little to derive anything from God; cf. Jas. 4:6,10] of all the kindness and faithfulness [God remained loyal in keeping His promises to Jacob] you have shown your servant. [note the kindness God had shown Jacob…] I had only my staff [his sole possession] when [20 years earlier] I crossed this Jordan, but now I have become two groups [his family, possessions, and livestock were so numerous that he had to travel in two groups; Jacob acknowledged God as the Source of all his blessings].

32:11 Save me, I pray, from the hand of my brother Esau, for I am afraid [he knew that Esau was coming to meet him with 400 men] he will come and attack me, and [Jacob’s concern extended to others…] also the mothers with their children.

32:12 But you have said [cf. 32:9], ‘I will surely make you prosper and will make your descendants like the sand of the sea, which cannot be counted.’”