2:1 A few days later [unspecified period of time], when Jesus again [cf. Mk. 1:21-38 re: Jesus’ earlier ministry in Capernaum] entered Capernaum [Jesus’ base of operations in Galilee (Matt. 4:13; 9:1)], the people heard that he had come home [possibly refers to the home of Simon and Andrew (Mk. 1:29); owner of the house later received an unexpected remodeling job (Mk. 2:4)].

2:2 So many gathered [at the house where Jesus was staying] that there was no room left, not even outside the door, and he [seized opportunity] preached [cf. Mk. 1:14-15 for a summary of the content of His preaching] the word to them.

2:3 Some men came, bringing to Him a paralytic [could not get to Jesus by himself], carried [on a mat as per 2:4] by four of them. 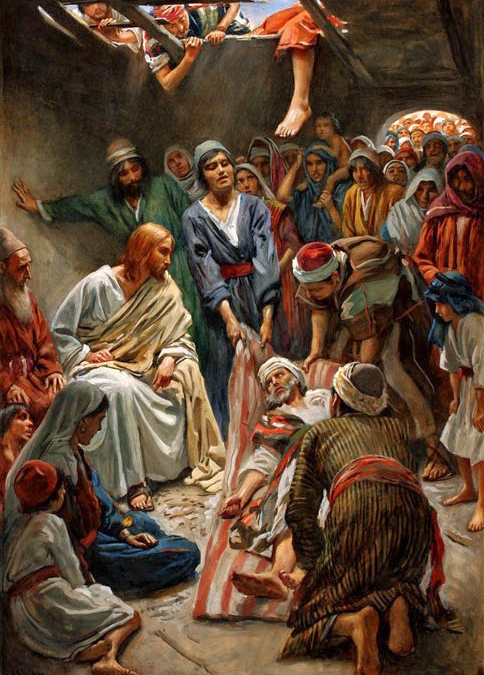 2:4 Since they could not get him to Jesus because of the crowd [represented an obstacle], they [resourcefully and single-mindedly] made an opening [probably climbed an outside staircase leading to the roof; literally “they unroofed the roof”] in the [probably flat] roof [beams and rafters covered with branches and sod] above Jesus and, after digging [with determination] through it, lowered the mat [the paralytic’s bed] the paralyzed man was lying on.

2:5 When Jesus saw [actions demonstrated faith] their [four friends and the paralytic] faith, he [authoritatively] said to the paralytic, “Son [term expresses affection regardless of age], your sins [spiritual need deeper than the physical need; Mark did not indicate if there was a cause-effect relationship between the man’s sins and his paralysis] are forgiven [“to release” or “to leave” or “to cancel a debt;” what the man needed most; read analogies of forgiveness in Isa. 1:18; Ps. 103:12; Mic. 7:19].”

2:6 Now some teachers of the law [scribes: scholars of the Mosaic law; trained in interpreting, teaching, and enforcing the Law; according to Lk. 5:21 the Pharisees were also present] were sitting there [probably with the intention of trapping Jesus], thinking [to reason, to debate] to themselves,

2:7 “Why does this fellow talk like that? He’s blaspheming [to insult, defame, or profane God or God’s name, in this case by claiming prerogatives and privileges that belong only to God: an act punishable by stoning: Lev. 24:10-23; Num. 15:30]! Who can forgive sins but God alone [according to first-century Jewish tradition, not even the Messiah could forgive sins]?”

Note: Jesus encountered conflict and experienced opposition almost from the beginning of His ministry. What can we expect as His disciples (see John 16:1-4; 17:14)? How should we respond? (see Matt. 5:10-12)

2:8 Immediately Jesus knew [to perceive; to recognize; cf. Jn. 2:24-25] in his spirit [inner person] that this was what they were thinking in their hearts, and he said to them, “Why are you thinking these things?

2:9 Which is easier: to say to the paralytic, ‘Your sins are forgiven [something not open to direct observation],’ or to say, ‘Get up, take your mat and walk’ [something more difficult because everyone can witness the result]?

2:10 But that you may know that the Son of Man [Jesus’ favorite self-designation during His earthly ministry; title for Messiah (cf. Dan. 7:13-14); a less familiar title for the Messiah that Jesus filled with His own meaning] has authority [power; moral or legal right to use power; Jesus claimed the moral right to forgive sins] on earth to forgive sins …” He said to the paralytic,

2:12 He got up [immediately obeyed the command of Jesus], took his mat and walked out in full view of them all. This amazed [to be beside one’s self] everyone and they praised [to give glory to] God, saying, “We have never seen anything like this!”

2:13 Once again [refers to previous occasion when Jesus called Simon, Andrew, James, John] Jesus went out [from the city of Capernaum on the northwest shore of the Sea of Galilee] beside the lake [Sea of Galilee]. A large crowd [perhaps curious and spiritually hungry; see Matt. 9:36 re: what Jesus saw in the crowds] came to him [perhaps as a result of the miracle they witnessed in Mk. 2:1-12], and he began to teach them.

2:14 As he walked along [after teaching the crowd beside the Sea of Galilee], he saw Levi [Matthew (cf. Matt. 9:9)] son of Alphaeus sitting at the tax collector’s booth [custom office; toll booth; may have been a tax station on the trade route (Damascus to Egypt) or a place for port duties and fishing tolls; he collected taxes for Herod Antipas; tax collectors had a reputation for overcharging in order to line their own pockets, as in the case of Zacchaeus in Lk. 19:8]. “Follow me [a brief and urgent call; a call to relationship],” Jesus told him, and Levi got up [left his financial security] and followed [to follow as a disciple] him [knowing that he could never again return to his work as a tax-collector; a decisive break with his past; his response was immediate and his commitment total].

2:15 While Jesus was having dinner [to recline (at the table)] at Levi’s [first act as a follower of Jesus was to host a dinner to introduce his friends to Jesus] house, many tax collectors [not Roman, but native Jews who had been contracted to collect taxes in a small town or district; publicans] and “sinners” [term used by Pharisees to designate those who did not keep requirements of Mosaic Law] were eating with [to recline at the table together] him and his disciples, for there were many who followed him.

2:16 When the teachers [scribes: experts in the law of Moses] of the law who were Pharisees [means “separated ones;” the major religious party in Jesus’ day] saw him eating with the “sinners” and tax collectors, they [offended by Jesus’ actions] asked his disciples: “Why does he eat with tax collectors and ‘sinners’? [cf. Lk. 15:1-2]”

2:17 On hearing this, Jesus said to them, “It is not the healthy [strong] who need a doctor, but the sick [“to have it badly”]. I have not come to call the righteous [Jesus was not implying that the Pharisees were righteous; Pharisees thought they were righteous when they too were among the sick Jesus came to save], but sinners [conscious of their unworthiness before holy God and their need for salvation (cf. Lk. 18:9-14)].”

2:18 Now John’s disciples and the Pharisees [required by law to fast only on Day of Atonement (Lev. 16:29)] were [regularly/habitually: Pharisees voluntarily fasted two days each week as in Luke 18:12] fasting [an accepted and expected religious expression in Jesus’ day]. Some [perhaps common or religious] people came and asked Jesus, “How is it that John’s disciples and the disciples of the Pharisees are fasting [according to the tradition of the day], but yours [do not observe formal times of fasting] are not?”

2:19 Jesus answered [used illustration of a Jewish wedding feast], “How can the guests [disciples] of the bridegroom [Jesus: see John 3:29] fast [rather than feast] while he is with them? They cannot [it is unthinkable and inappropriate], so long as they have him with them.

2:20 But the time will come when the bridegroom [Jesus] will be [abruptly] taken from [veiled reference to Jesus’ death on the cross] them [disciples], and on that day [the appropriate time: cf. 2 Sam. 12:22-23] they will fast [an expression of grief and sadness].