15:22 They [Roman soldiers] brought [possibly led or carried] Jesus to the place called Golgotha [Greek word for a place located outside the city’s walls — see Heb. 13:12] (which means [in Aramaic] The Place of the Skull [Latin word is translated Calvary]).

15:23 Then [before He was nailed to the cross] they [perhaps friends since the soldiers would want to inflict maximum pain] offered him wine mixed with myrrh [an anesthetic or sedative to induce sleep and deaden pain], but he did not [see Matt. 27:34] take it [He accepted His sentence and the suffering it involved / He was willing to feel the full impact of the crucifixion].

15:24 And they crucified [the most horrible way to die at the time / Mark did not have to elaborate because his Roman audience would have understood] him [Jesus was not a victim but a volunteer]. Dividing up his clothes, they [soldiers] cast lots [fulfilled prophecy of Ps. 22:18] to see what each would get [ironically they could have received something far greater than Jesus’ clothing]. 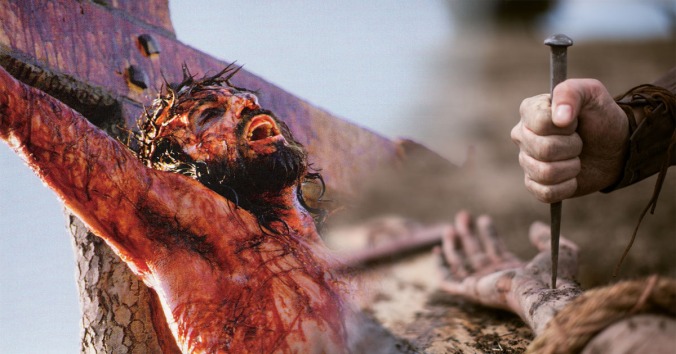 Note: “The pain was absolutely unbearable … In fact, it was literally beyond words to describe; they had to invent a new word: excruciating. Literally, ‘excruciating’ means ‘out of the cross.’ Think of that: they needed to create a new word, because there was nothing in the language that could describe the intense anguish caused during the crucifixion.” (“The Case for Christ” • Lee Strobel • pp. 197-198)

15:25 It was the third hour [9:00 AM] when they crucified [a painful and humiliating form of execution] him.

15:26 The written notice of the charge [Roman custom was to indicate charges on a sign hung around the accused person’s neck] against him read: THE KING OF THE JEWS [Jewish leaders protested wording of sign (John 19:21-22); see also Luke 23:2].

Note: Pilate displayed the sign out of contempt for the Jewish leaders, but it was also the truth.

15:27 They crucified two robbers [Greek word: lestes, refers to political insurrectionists or terrorists who may have robbed to obtain support for their cause: see Mark 15:7 regarding Barabbas; perhaps they had participated in the treason of Barabbas] with him [see prophecy in Isaiah 53:12], one on his right and one on his left [see Luke 23:39-43].

15:29 Those who passed by hurled insults at him, shaking their heads [a gesture of contempt] and saying [fulfilled Ps. 22:7], “So! You who are going to destroy the temple and build it in three days [see John 2:19],

15:31 In the same way the chief priests [probably Sadducees: failed to recognize the Great High Priest] and the teachers of the law [Pharisees] mocked [Greek: empaizo, “to ridicule” or “to make fun of”] him among themselves [rather than to His face]. “He saved others [interestingly, they acknowledged His saving work],” they said, “but he can’t save himself [had Jesus chosen to save Himself He could not have saved others]!

Note: How do you react when people insult you because of your following Jesus?

15:32 Let this [not “the”] Christ, this [not “our”] King of Israel [they did not believe these things about Jesus but spoke these words in derision], come down now from the cross, that we may see and believe [see John 11:46-53].” Those crucified with him [two thieves] also heaped insults on him [total rejection from everyone present].

15:34 And at the ninth hour Jesus cried out [Mark recorded only one of Jesus’ seven sayings from the cross] in a loud voice, “Eloi, Eloi, lama sabachtani? [an Aramaic version of Ps. 22:1]” — which means, “My God, my God [one of Jesus’ five double expressions], why have you forsaken [term means: “to be left behind”] me? [for the first time in eternity Jesus experienced the pain of feeling absolutely alone]”

Note: Jesus understands what it is like to be lonely. Suggest people in society today who may be forsaken or feel lonely. How can we minister to them and help them understand that God will never forsake them?

15:35 When some of those standing near heard this, they said, “Listen, he’s calling Elijah.”

15:36 One man ran, filled a sponge with wine vinegar, put it on a stick, and offered it to Jesus to drink. “Now leave him alone. Let’s see if Elijah comes to take him down,” he said.

15:38 The curtain of the temple [which separated the holy place from the holy of holies: only one priest entered the holy of holies on the Day of Atonement — once a year] was torn in two [indicating it was no longer needed: no more need for OT rituals; Jesus was the ultimate and final sacrifice] from top to bottom [indicative of God’s action and symbolizing the removal of the barrier between God and man: see Heb. 10:19-22].

15:39 And when the centurion [a Roman army officer responsible for 100 men: an unlikely convert and evangelist], who stood there in front of [in a position to witness all the events at the crucifixion] Jesus, heard his cry and saw how he died [overwhelming evidence of Jesus’ identity], he said, “Surely this man was the Son of God!”