4:1 Then [“At once” or immediately (cf. Mk. 1:12)] Jesus was led [sent or compelled] by the Spirit into the desert to be tempted [temptation often follows a commitment to obey/serve God; spiritual victory often followed by spiritual conflict; temptation tries to divert us from God and what He has called us to do; cf. Heb. 4:15] by [points to source of temptation] the devil [slanderer or accuser; the devil is real].

Note: The late evangelist Angel Martinez once said: After the baptism came the battle. After the dove came the devil. After the voice from heaven came the roar from hell.

4:2 After fasting [helps individual draw near to and focus on God] forty days and forty nights, he was hungry [famished; result of fast; Satan attacked Jesus at vulnerable point]. 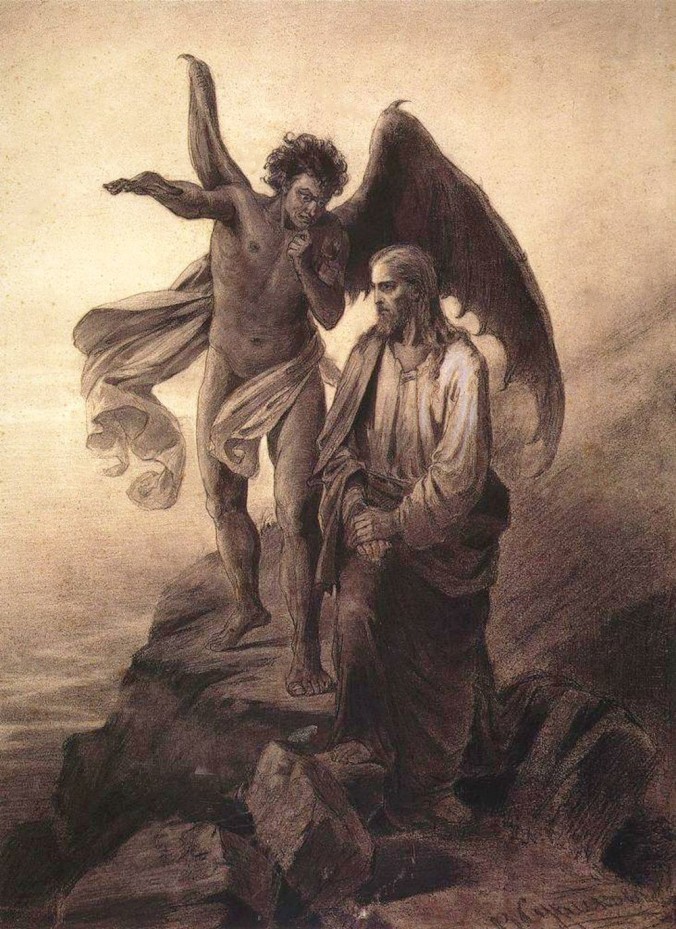 4:3 The tempter [emphasizes a function of the devil] came to him and said, “If [does not express doubt; first class condition in Greek construction: the reality of a condition affirmed from viewpoint of the speaker; can be translated “since”] you are the Son of God [same title for Jesus used at His baptism (cf. Matt. 3:17)], tell these stones to become bread.”

4:4 Jesus answered [cf. Deut. 8:3], “It is [stands] written: ‘Man does not live on bread alone [people do need bread or physical nourishment; cf. Matt. 6:11], but [cannot depend solely on own resources; people have greater need for spiritual nourishment] on every word that comes from the mouth of God.’”

4:5 Then the devil took [to lead] him to the holy city [Jerusalem] and had him stand on the highest point [pinnacle or summit; portico on southeast corner of temple complex; about 450 feet high] of the temple.

4:6 “If [since] you are the Son of God,” he said, “throw yourself down [temptation to misuse/abuse power available to Him; a presumptuous act rather than a great act of faith]. For it is written [devil quoted but twisted the meaning of Ps. 91:11-12 to suit his purposes; this passage not a license to abuse God’s power to satisfy a personal whim]: “‘He will command his angels [messengers] concerning you, and they will lift you up in their hands, so that you will not strike your foot against a stone [a spectacular rescue would have impressed the masses].’”

4:8 Again, the devil took him to a very high mountain and showed him all the kingdoms of the world and their splendor [brightness, glory].

4:18 As Jesus was walking beside the Sea of Galilee, he saw two brothers, Simon called Peter [cf. Jn. 1:42] and his brother Andrew. They were casting a net [two kinds of nets used by fishermen: a circular casting net (used while standing in the water) and a dragnet (used from a boat)] into the lake, for they were fishermen [commercial fishermen who earned their living by selling their catch].

4:19 “Come, follow me,” Jesus said, “and I will make you [indicates that Jesus Himself would equip them for the work to which He was calling them; Jesus cannot “make you” into anything apart from a commitment to follow Him; the journey toward the realization of our fullest potential begins when we follow Him] fishers of men [Jesus used the figure of their old work to describe their new calling; instead of dragging the Sea of Galilee for fish these men would now cast their nets into “the sea of sin” to “rescue the perishing”].”

4:20 At once [their response was immediate] they left their nets [represented their livelihood and security] and followed him [and by so doing their lives took on an eternal dimension; instead of making a living, they would now be making a life].