2:1
Notice that this verse begins with the word “Again.” The word “again” reminds us that Satan is persistent. He does not give up. He comes again and again to carry out his diabolical agenda (see John 10:10a). Luke 4:13 records that after unsuccessfully tempting Jesus in the wilderness, Satan “departed from Him [Jesus] until an opportune time.” Satan tirelessly works to set men in opposition to God.

2:2
The Lord asked Satan the same question He asked in Job 1:7. Satan’s answer was the same as his answer in Job 1:7. It is interesting to note that Satan makes no mention of Job when he presents himself before the Lord the second time. Satan did not say, “I’ve just come from roaming about on the earth where I unsuccessfully tried to get Job to curse You to Your face.”

2:3
The Lord once again asked Satan if he had considered His servant Job who did not curse God as Satan had hoped. It is interesting that the Lord asked Satan if he had “considered” Job. Satan had done nothing but consider Job. Satan had been totally occupied with the matter of Job’s destruction. It was God’s way of emphasizing Job’s triumph over Satan’s attacks. In spite of all that Satan had done, Job remained true to God and did not loosen his grip on his integrity. Thomas Robinson notes, “Satan’s object in trial is to destroy; God’s, to prove and purify.”

2:4-6
Again, Satan questioned Job’s motives for remaining faithful to God. He used a bartering term, “skin for skin,” which means to trade one skin for another. Satan asserted that Job was only too glad to save his own skin, even if it was at the expense of the skin of his livestock and children. A man will part with anything to save his own life, Satan said. Satan confidently challenged that Job would change his tune if he personally experienced physical pain and suffering. Satan believes that every man has his price and he felt that Job’s price was his own skin. Satan felt certain Job would crumble under the weight of personal physical pain and consequently curse God to His face. God then permitted Satan to touch Job’s body but to spare his life. Once again, God’s sovereignty kept Satan in check. Thomas Robinson writes, “Though God lengthens Satan’s chain, he never loosens it.”

2:7-8
Satan wasted absolutely no time in departing from heaven to carry out his cruel mission of destruction. He unleashed his full diabolical fury on Job. Satan “smote Job with sore boils from the sole of his foot to the crown of his head.” Job was in intense agony as a result and sought to find relief by scraping himself with a potsherd. There are several graphically descriptive references throughout the book to the pain and suffering Job experienced for months (7:3 and 29:2) as a result of the boils.

2:9-10
The words of Job’s wife (who had the spiritual gift of discouragement) are recorded in verse 9. At the time when Job most needed the comfort and encouragement of his wife, she questioned why Job was still holding fast to his integrity. She unwittingly aided Satan in his efforts to get Job to curse God. She felt that in view of all that had befallen her husband, God was no longer worthy of his allegiance (or hers). And so, she counseled him to “Curse God and die!” Job sternly rebuked his wife for her foolish suggestion and refused to sin against God. These are the only words of Job’s wife that are recorded in the book. We do not know what she did after Job rebuked her. Perhaps she left him. 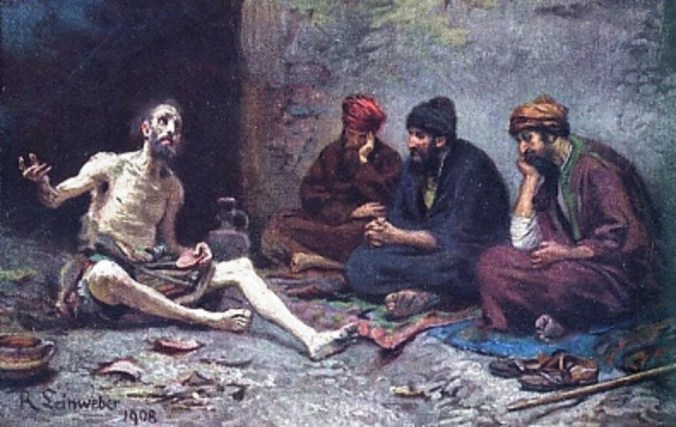 2:11-13
The news of Job’s misfortune must have spread throughout the land of Uz. When Job’s friends heard of his awful misfortune, they “made an appointment together to come to sympathize with him and comfort him” (2:11). Job’s friends (Eliphaz, Bildad, and Zophar) had the very best of intentions. They hoped to bring comfort to their friend. Affliction should certainly draw us to our friends. When these three friends approached Job they “did not recognize him” (2:12). Job was so disfigured by the boils that even his best friends did not recognize him. They were stunned by what they saw and immediately wept and grieved with him (2:12). In addition, they were so horrified at what they saw that did not speak a word to him (2:13). They just silently sat with him for an entire week and waited for Job to speak first (according to the custom of the day).